Gilbert Melendez: The UFC Belt Is Best Belt, and I Want It 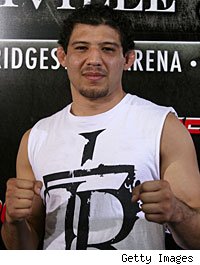 Strikeforce lightweight champion Gilbert Melendez sat down with UFC President Dana White recently and put it out there that he'd love to get a crack at the UFC lightweight title.

"I just wanted to discuss my future with the organization," Melendez said Monday on The MMA Hour. "It looks like I have a good future. ... I just expressed that I want to fight the best."

Although Melendez described himself as a loyal Strikeforce fighter who still has four fights left on his contract, he made no secret of the fact that his ultimate goal in the sport is to be the champion in the Ultimate Fighting Championship.

"The UFC title is the best belt," he said. "I want that belt and I want it as soon as possible."

Melendez said he believes he matches up well with UFC lightweight champion Frankie Edgar and has done enough that he deserves the next shot at Edgar's belt.

"I'm definitely impressed by Frankie. He's an amazing fighter. He's great," Melendez said. "I honestly feel like I'm the No. 1 contender and I feel like I'm ready for the title shot now."

The UFC has already brought in Strikeforce heavyweight champion Alistair Overeem and Strikeforce welterweight champion Nick Diaz, and Melendez is hoping he's next. Melendez stressed, however, that he's not allowing the possibility of fighting in the UFC distract him from his planned December 17 Strikeforce fight with Jorge Masvidal.

"I've been focusing on Jorge Masvidal," Melendez said. "He's the first guy in line. I think he's the No. 1 contender, as of now, in Strikeforce, and as of now I have to focus on that guy. He's real tough. But it's hard not to get excited when you hear all these rumors."

Melendez had nothing but positive things to say about Strikeforce, but he has been frustrated at times that the general public recognizes only UFC fighters as the best in the world.

"The most frustrating thing is the recognition," Melendez said. "A lot of people don't recognize me as a great fighter because I haven't beaten any UFC guys."

Melendez hopes to change that soon.