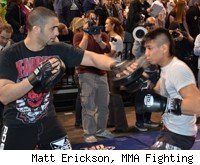 Trainer Firas Zahabi was encouraged by what he saw out of Kenny Florian early on in his UFC featherweight title fight against Jose Aldo on Saturday night. But ultimately, Zahabi told Ariel Helwani on Monday's MMA Hour, their team just couldn't keep up with Aldo down the stretch.

"Aldo did a beautiful job of adjusting in the second, and I feel that our side had to adjust as well to keep the match going in our favor, but we weren't able to adjust," said Zahabi, who works with Florian at the Tristar gym in Montreal. "Aldo's a brilliant fighter and he had a brilliant counter to our attacks and he just did a great job."

The unanimous decision loss to Aldo was the third failed bid for a UFC title in Florian's nearly nine-year MMA career, and now the 35-year-old fighter faces some difficult questions about his future. As for how he'll decide to answer those questions, Zahabi said he doubts even Florian knows just yet.

"I feel we did everything we could to prepare him for Aldo and Kenny's going to have to let his mind take some time off, clear his mind, then make that decision for himself afterwards," Zahabi said, adding, "I don't think he's decided yet."

As for Zahabi, he must quickly turn his focus to his most celebrated fighter, long-time friend Georges St-Pierre, who puts his UFC welterweight title on the line against Carlos Condit at UFC 137 on October 29.

St-Pierre, who Zahabi still considers to be the world's best pound-for-pound fighter ("Of course I'm biased, like all coaches," he admitted), was originally slated to take on former Strikeforce welterweight champion Nick Diaz before Diaz angered the UFC by no-showing a couple press conferences, which led to Condit replacing him in the main event.

The GSP-Diaz bout's champion-versus-champion angle might have been more interesting "from a marketing perspective," Zahabi said, "but in terms of skill, I think it's even harder with Carlos."

"He has good knees and good kicks. He's more of a diverse fighter standing up. And if you look at his record, he's very good at finishing. He's just got a few more threats. Diaz has a different style of boxing, which made him more of a threat with the hands, but I find that in terms of Muay Thai, we have to adjust for more of a Muay Thai fighter and less of a boxer."

Of course for St-Pierre, who has defended his title with four straight decision victories, the most common criticism concerns his perceived inability or unwillingness to look for the finish. Many fans and pundits accuse him of playing it too safe, but Zahabi said he encourages his fighter to put those matters out of his mind altogether.

"I think he has to focus on the process, not worry about the outcome, and let that part take care of itself. If he starts trying to finish him I think he'll have a harder time finishing him. He's just got to let it happen. I think that's the secret to finishing.

"When you're looking to knock the guy out, you telegraph more. You come out of your game plan. You start taking more risks and you start skipping steps. If you want to finish a guy, in my opinion, you have to go through all the steps, just keep adding more pressure, adding more attacks, tying your moves together until you get that finish. You don't have to jump to the end. You have to take every step along the way to get to that end."

Whether GSP can get to that end against Condit, who hasn't been finished since 2006, remains to be seen. If the bout ends with another decision win for the current champ, however, don't be surprised if many fans focus exclusively on the result, no matter what the process might have entailed.