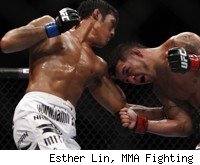 Nam Phan got his revenge on Leonard Garcia on Saturday night at UFC 136, beating Garcia by unanimous decision in a fight that looked a lot like the bout last year when Garcia beat Phan by a controversial split decision.

It was every bit the wild, sloppy brawl that everyone expected from these two, but Phan was the more technical, accurate striker, while Garcia was unloading haymakers that often didn't land. By the end of the fight both men were exhausted, but Garcia wasn't just breathing hard, he also had a bloodied and bruised face.
More Coverage: UFC 136 Results | Nam Phan vs. Leonard Garcia Live Blog

However, Garcia's wild style appeals to some judges, and Garcia did land a hard strike in the third round that sent Phan to the canvas. It wouldn't have been a shock if Garcia had been given the decision.

But Phan won, and he deserved to win. The victory improves Phan's professional MMA record to 17-9. Garcia falls to 15-8-1.