Eight Ways of Looking at UFC 136 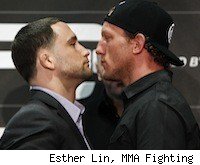 Musings, ramblings, questions, and predictions abound in the final hours before UFC 136 in Houston. Here are just a few of them, for your consideration.

I. After the first Frankie Edgar-Gray Maynard fight, who'd have guessed we'd want to see two more? Certainly not me. I remember well the feeling of dull obligation when the main event at UFC 125 rolled around. I was at home, watching the pay-per-view with my wife and some friends. After the Leben-Stann fight most of my friends went home (or to the bars that might as well be their homes), and my wife went to bed. If it hadn't been my job to stay up and write, I might have DVR'd the final fight and followed her. Thankfully, I had no choice but to watch it live, and by the end of the first round I was debating waking her up and telling her she just had to see what was happening. I didn't (my wife's a fan, but she doesn't mind waiting until the morning to catch the recorded version), and it was probably the right call for the sake of domestic bliss. Still, that fight served as a reminder that no matter how many events you've seen, you never know for sure what you're going to get. That's a sword that cuts two ways, of course, and with the Edgar-Maynard trilogy we have no way of telling whether the end will be fittingly satisfying or disappointingly mediocre. Maybe the best we can hope for is that finally, after months of waiting, it will really and truly be over.

II. In terms of his legacy, Kenny Florian has never had a more important fight. It's not just because there's a title at stake. He's been there before. It's because, if he loses, this will almost certainly be the last UFC title that Florian ever gets a shot at. He's already dropped as low as he can go, and there's no future for him back at lightweight. Either he's going to finally win a title, or he's going to cement his legacy as one of the best UFC fighters to never be a champion -- a sort of MMA Jim Kelly, if you will. It's not the worst thing that could happen. Better to be Kelly than to be Ryan Leaf. It's better still to be a champion, and Florian is looking at his last best hope.

III. So...have we all just forgotten about that whole Chael Sonnen testosterone thing? The fact that it was a huge issue after the Anderson Silva fight and a complete non-issue before this fight really makes you wonder, are our attention spans that short, or was it all really just a paperwork and disclosure issue after all? No one seems to be asking Sonnen whether he's been using testosterone in the lead-up to UFC 136, with the exception of a guy named Aaron on our recent live chat, and kudos to him. Aaron asked Sonnen point blank whether he's still using it and whether it's legal for him to do so in Texas, to which Sonnen replied:

"I really can't get into it because I don't fully understand it myself. It's one of those things you try to learn as best you go but I'm not the guy who handles that. I'm not a manager. And they don't make it extremely clear. There's not a web site or anything we can go to to find out. ...It would be helpful if the commissions told us more. It makes it tough on a guy to follow a rule when nobody is willing to clarify what the rule is."

IV. Gray Maynard hasn't finished a fight inside the distance since 2007. Edgar hasn't done it since 2009, and that was against not-so-distinguished competition in Matt Veach (who's now riding a two-fight losing streak in the minor leagues, last time I checked). For the fans who crave finishes and berate champions who don't deliver them, is this a kiss of death? Will they continue to care about and/or pay to see UFC lightweight title contests if it's almost a given that it will end up in the hands of the judges? I don't know, but personally I've never understood the line of reasoning that claims the only good fight is a finished fight. Granted, draws like the one we saw last time leave us feeling cold, but who can say they didn't have a great time watching that fight? Just because no one tapped or got knocked out, that doesn't necessarily mean it wasn't money well spent.

V. Joey Beltran has never lost to a fighter making his UFC debut. Okay, so he's only fought two of them so far -- Rolles Gracie and Aaron Rosa -- but he won both. Now he'll try to keep the streak intact against undefeated newcomer Stipe Miocic, who the UFC reportedly has high hopes for. Can Beltran play spoiler again? Oddsmakers don't think so. Most have Miocic as a 3-1 favorite. But then, they've been wrong about Beltran before.

VI. We're about to find out a lot about Anthony Pettis' potential. He dazzled us with the Showtime kick in the WEC, then squandered his promised title shot with a loss to Clay Guida in his UFC debut. Now he's relegated to the prelims in a fight against Jeremy Stephens, who is the exact sort of fighter you simply must be able to beat if you want to be a contender at this level. Stephens is a resilient scrapper with knockout power, but he's no world-beater. He's someone who, on paper, Pettis ought to be able to handle. But Stephens never makes it easy on you, and he's never more than one good punch away from ruining your night. If Pettis can't beat him, we'll know that "Showtime" isn't quite ready for primetime.

VII. Jorge Santiago doesn't need to panic just yet, but he should be at least a little concerned. His last UFC run ended after two consecutive losses in 2006. Now he's 0-1 in his return, and facing a heavy favorite in Demian Maia. A loss here doesn't necessarily mean he's gone -- Stann and then Maia is a heck of a one-two punch in your first fights back in the UFC -- but it doesn't bode well for his future either.

VIII. Melvin Guillard didn't have to take this fight, but why wouldn't he? After five straight wins, he could have probably opted to sit around and wait for either a title shot or at least a clear number one contender bout. But the way the lightweight division is looking right now, on the sidelines is no place to be. By continuing to take fights Guillard not only keeps his skills sharp and his bank account full, he also keeps himself in the conversation about top UFC lightweights. When the UFC does finally get around to promoting a 155-pound title fight that doesn't include both Maynard and Edgar, Guillard's recent triumphs will still be fresh in people's minds. That is, if he is indeed triumphant here. Naturally, nothing's guaranteed, but if you didn't think you could beat Joe Lauzon 99 times out of 100, what would make you think you could be UFC champion?