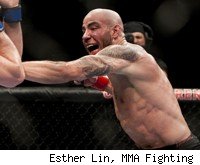 Ben Saunders and Douglas Lima both looked great on Saturday night. Next they'll face each other.

Saunders and Lima earned impressive victories in the semifinals of the Bellator Fighting Championships welterweight tournament, earning a spot in the final where they'll meet each other next month.

For Saunders, it was a dominant, one-sided victory over Luis Santos in which he finally forced Santos to tap out with an americana in the third round. For Lima, the victory came when he landed a beautiful right cross to the chin of Chris Lozano, knocking him cold.

The wins by Saunders and Lima were part of an entertaining Bellator 53 card on Saturday night, which also featured some solid undercard action:

-- Giva "The Arm Collector" Santana made his Bellator debut and did exactly what everyone expected him to do, submitting Darryl Cobb with an armbar in the first round. It improved Santana's record to 17-1, including an incredible 13 wins by armbar.

-- In a fast-paced featherweight contest, Ronnie Mann submitted Kenny Foster with a triangle choke. The victory improves Mann's record to 21-4-1, including 11 wins by submission. Mann showed that he's one of the top fighters in Bellator's featherweight division, which is the promotion's best weight class.

-- And in the heavyweight division, Thiago "Big Monster" Santos finally made his Bellator debut and made quick work of Josh Burns. Santos easily controlled Burns on the ground and forced him to tap out to a rear-naked choke midway through the first round. It was a solid Bellator debut for the Brazilian.