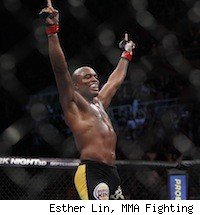 The votes have been tallied and UFC middleweight champion Anderson Silva will grace the cover of the upcoming UFC Undisputed 3 video game.

THQ made the announcement Saturday during an official unveiling at the UFC Fan Expo in Houston. According to the gamemaker, over 120,000 votes were collected online from all over the world. To view the cover, click here.
The first game in the UFC Undisputed series UFC 2009 Undisputed, released on May 19, 2009, featured Forrest Griffin on international editions and Georges St-Pierre in the Canadian cases. The follow-up, UFC Undisputed 2010, was released on May 25, 2010 and featured then-heavyweight champ Brock Lesnar.

This third installment will hit shelves early 2012 on the Xbox 360 and Playstation 3.