A Journey Into the Mind of Chael Sonnen 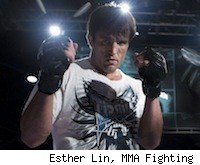 HOUSTON -- I am supposed to write something about Chael Sonnen. I know this. I keep reminding myself of it. But nothing comes.

It is not writer's block. I am simply confused by him. This is not a shocker. Sonnen is a bright guy, but he says lots of things, many of which are not compatible with others. He says things that are funny, if not always 100 percent true. But mostly, he says things with feeling. And feelings are hard to quantify in words.

This is a hard fight for him, you can tell.

First, there is a lot at stake. Sonnen has blood, sweat and tears invested into this matchup, not for what it is, but what it could be. He needs another chance to fight Anderson Silva, that much is obvious. And the only way to get there is by winning at UFC 136.

Second, he likes Brian Stann. For real. He was at Stann's first fight back in 2006. Sonnen was the ringside announcer, and Stann fought his teammate Aaron Stark. Sonnen had trained with Stark long enough to know how good he was. And Stann ran through him. That memory stuck. Stann later came out to train with Sonnen and the Team Quest guys for a while. There is a tangible friendship there. When they got approached about the fight, Sonnen reached out to Stann. Let's do it, they both decided.

Chael Sonnen says these things and he sounds something we haven't heard before. He sounds vulnerable.

This is crazy, I think to myself. I have been covering MMA for several years now, and yet somehow, I had never crossed paths with Sonnen in person before this week. Like most of you, I've seen him evolve into a soundbyte-machine, and I came to town expecting that Chael.

He didn't disappoint, but the trademark brashness wasn't there.

On Thursday, I asked Sonnen how he expects to be received by the crowd. And at first he gave a political answer.

"I only ask the crowd to do two things: be present and be loud," he said.

But then, he went on.

Here's what he said this time around: "Brian can beat me, and I can beat him. I like those odds, 50-50, and it doesn't matter either way. Either way, you've got to move forward."

I didn't know what to make of it. Sure, it's an honest answer, but isn't a fighter supposed to believe 100 percent he is going to win? I mean, this is Chael Sonnen?

Maybe it really is Sonnen being vulnerable, and at his most candid. There is no way you can tell for sure. But there is no way you can go through what he went through -- problems that resulted in a suspension from his fight career and a legal conviction in his personal life -- and walk away unscathed.

Sonnen admitted as much this week, saying that he did have doubts about this whole return.

"What fun would this be if you knew the outcome?" he said. "What fun would this be if it wasn't all on the line? That's how I want it. I love dealing with that adversity. I love going to the ring hurt or sick or tired and trying to figure out how to win anyway. That's just the way it goes. I saw the ride and bought the ticket anyway. So I'm on board for it. I don't care."

This week, the brashness was muted and the honesty was turned up. That struck me. It's almost like he was bracing himself. Or maybe the wound is still open. Or maybe I'm reading too much into it. But Sonnen has something to prove, and his mouth can't do it.