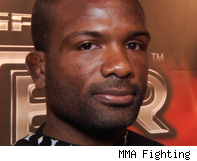 Veteran fighter Din Thomas, attempting to return to the cage for the first time in nearly two years, didn't make it to his fight Friday.

The UFC vet, scheduled to fight in the main event at Fight Time 7 at the War Memorial Auditorium in Fort Lauderdale, Fla., was reportedly injured in a car accident on the way to the venue. Fight Time promoter Howard Davis Jr. confirmed the news in a video released on YouTube following the show.

Davis, who built the show – "Fight Time 7: The Return of Din Thomas" – around the American Top Team product, gave early specifics on Thomas' condition, but did not give any details on the accident. No other details about the crash were available late Friday.

Thomas (25-8), a 35-year-old who started his career 12-1 to get a shot in the UFC, has been out of action since a January 2010 win over Dustin Pague in a World Extreme Fighting show in Pittsburgh. That win gave him three straight since being cut by the UFC in 2008.

Thomas has had three stints in the UFC. His debut came at UFC 32, a first-round knockout loss to BJ Penn. He followed that with a win over Fabiano Iha at UFC 33, and two wins outside the promotion.

At UFC 39, Thomas lost to Caol Uno. But he rebounded at UFC 41 with a majority decision win over future welterweight champion Matt Serra. Thomas then spent more than three years away from the UFC before returning by way of the comeback season of "The Ultimate Fighter," Season 4.

After the show, Thomas built a three-fight winning streak against Rich Clementi and current lightweight contenders Clay Guida and Jeremy Stephens in 2007. But consecutive losses to Kenny Florian and Josh Neer ended in his release from the promotion with a 5-4 record over the three stints.

In 2010, Thomas was scheduled to fight boxer Ricardo Mayorga in an MMA fight. But a last-minute injunction against Shine Fights and Mayorga, stemming from a cease and desist motion filed by Don King Productions, shut that fight down.

Davis, the head boxing coach at American Top Team, also spoke in the video about his close relationship with Thomas.

"Din is like a son to me," Davis said. "When I first came to American Top Team eight and a half years ago, there were only five or six fighters at the time. And Din was one of the first fighters I trained. One of the things that really showed me who Din Thomas was, was I always look at someone's character. He is always honest and up front about himself. (He's) a very dignified gentleman, and showed poise as a fighter."

Thomas was scheduled to fight M-1 veteran George Sheppard (10-6) in the main event at Fight Time 7. Fight Time, run by Davis and his wife, has been putting on MMA shows in south Florida for a year.