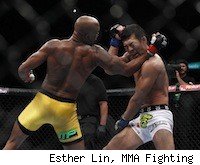 Get used to it.

The schedule continues to grow at an exponential rate, according to UFC president Dana White, who said that the organization has already penciled in dates on its 2012 calendar.

The final tally? Thirty-four events. That's a serious increase from 2011, which will see 27 live events by the time Brock Lesnar and Alistair Overeem close out the UFC's year in Las Vegas on December 30.

That increased number of shows will come as welcome news to fans in markets that have been promised events but were shut out in 2011, like Sweden and Ireland. Though no locations are yet set in stone, the increased frequency of events will at least provide additional opportunities to visit more parts of the world as the UFC continues to grow its global footprint.

White also reiterated his plan to host two events on the same day at least once next year, with their first experiment in dual productions tentatively planned for late February, with shows in Las Vegas and Japan.

In 2011, the UFC re-opened what they believe will be a huge market for them, hosting a show in Brazil to great fanfare. It was the organization's first venture there since 1998. Afterward, UFC CEO and chairman Lorenzo Fertitta was so pleased with the reception that he voiced a hope the promotion could bring as many as four events there in 2012.

Aside from that, entering the Japanese market would be something of a coup for the UFC, which has not brought fights there under the Zuffa banner.

The expanded schedule is just one of many planned and/or official UFC initiatives and changes to roll out in 2012. Also among them, a move to network television on FOX, a departure from longtime cable home Spike, the addition of a flyweight division, and a revamping of The Ultimate Fighter to include live weekly fights.