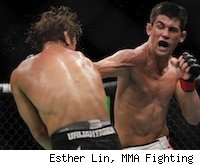 HOUSTON -- The right hand injury sustained by UFC bantamweight champion Dominick Cruz has yet to be diagnosed by a specialist, but he expects to undergo an MRI in the coming week to learn the extent of the damage.

Cruz told MMA Fighting on Friday that while he couldn't conclusively say what the injury was, he believes it to be similar to one he suffered on his left hand after a successful WEC 53 title defense against Scott Jorgensen at WEC 53 in December 2010. That resulted in a broken hand that required a soft cast for six weeks followed by extensive rehabilitation.

Cruz said he hurt his right hand early in the first round of his UFC Live fight with Demetrious Johnson last weekend, but he still won decisively, earning a unanimous nod from the three judges.

"My hand was hurting real bad," said Cruz, who currently has the middle and ring fingers of the hand taped. "I don't know exactly when it happened. It's hard to say because when you're fighting, the way I work, you keep going. It's not an option to stop. You go until the fight's over and figure out a way to make it work. That's what happened."

Cruz (19-1) has held the bantamweight belt since March 2010, successfully defending it four times, more than anyone else.

That place in history was among the many motivating factors for Cruz to continue on in the bout, suggesting that to surrender to injury would be something that would haunt him long after his fighting days are over.