Ben Askren, Bellator Give Back to Tornado Victims in Joplin, Mo. 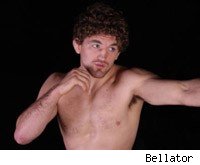 Ben Askren walked around the city of Joplin, Mo., in late May and could hardly believe what he was seeing.

The Bellator welterweight champion had been in the nearby town of Neosho to help at a wrestling clinic not long after a massive EF5 tornado devastated Joplin, ravaging everything in its path. It was one of the deadliest tornados in world history, killing 162 people.

Askren went to view the damage with friends from his days wrestling for the University of Missouri. Looking at the destruction, he knew there had to be a way to give something back – some how, some way.

"We went to one guy's house, and it wasn't even a house," Askren told MMA Fighting on Thursday, recalling the devastation. "It was just two walls, the roof was all gone, and you just look at that and think, 'I can't imagine this being my house. There's nothing left here.' Everything they owned is just gone, and they're staying with family and friends. You feel for people at times like that."

As Askren continued to look around, seeing buildings destroyed, cars thrown around like toys, trees uprooted and houses of his friends' friends ripped apart, he decided to ask his boss, Bellator CEO Bjorn Rebney, if the promotion could find a way to do something to help.

"It just blows your mind," Askren said. "You see it on TV, but you could never really imagine until you actually go there. So I texted Bjorn and said, 'Hey, it would be nice if we could do something for all these people.'"

Rebney, though, didn't have any quick answers.

"He said, 'What can we do? Can I do something?' Rebney said. "He was just reaching out asking what could be done. And I said, 'I don't know, buddy. I don't know what we can do.'"

Admittedly, Rebney said, coming up with a plan for the people of Joplin "fell off the radar screen" over the summer. But earlier this fall, when the promotion finalized the Buffalo Run Casino in Miami, Okla., a short drive from Joplin, for Saturday's Bellator 53, a plan finally got put into place – when Askren again reached out and was adamant in his desire to try to make a contribution.

Friday night, Bellator and Buffalo Run Casino will give away 300 tickets to Saturday's show to Joplin residents at Joplin High School's homecoming football game. For those still trying to rebuild the lives they knew before May 22, it won't change anything. But a temporary reprieve might help, even for just one night.

"I just hope the people that were affected can have some enjoyment for one night of fighting that Bellator's going to put on," Askren said. "It's not a huge gesture. It's not like we're rebuilding their houses. But every small thing helps."

"It's a great thing to do," Rebney said. "It's not going to change the dynamic of anybody's life in Joplin, but the people have been through a lot here. It's an opportunity to kind of kick back and forget about your issues for four or five hours."

Rebney said it was Askren's perseverance in wanting to find a way to give something to the people of Joplin that ultimately got the plan rolling, and started Bellator down the community service path, really for the first time.

"Thank God we haven't been in communities where something as tragic as what happened here happened before," Rebney said. "But this was more about Ben Askren reaching out. He was the guy really pushing it. He called me, I didn't have an answer, and he just stayed on it."

Rebney said Askren, who defends his welterweight title later this month at Bellator 56 against Jay Hieron, proved to him he has talents that extend beyond the cage, and that his strength of character is typical of many MMA athletes.

"It gives me a sense of pride that we're lucky enough to have a guy like Ben on our roster who isn't thinking of himself, who isn't doing it for any kind of sponsorship angle," Rebney said. "He was just calling me, saying, 'Dude, what can we do? How can we help? Can I do something? Can we do something? Big or small, it doesn't matter.' There's more of that in the MMA industry than people realize. It's a real good feeling, and I'm proud we have Ben on the roster – he's an amazing talent, and I think he's the best wrestler in mixed martial arts. But he's also a very good dude, and that counts for a lot."