UFC 140: Jon Jones vs. Lyoto Machida Will Be Main Event 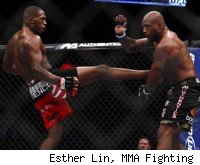 The main event for UFC 140 is set, with Jon Jones set to defend his light heavyweight title against former champion Lyoto Machida.

UFC President Dana White announced on Twitter that Jones vs. Machida will be the main event for the card, which takes place on Dec. 10 in Toronto.

The decision to give the next shot at the light heavyweight title to Machida comes as a surprise because Rashad Evans has long been declared the No. 1 contender. But Evans, who wore a cast on his hand when he faced off with Jones following Jones' victory over Rampage Jackson last month, will apparently not be ready to fight in time for Jones' next title defense.
More: UFC 140 Fight Card: Jones vs. Machida
For Jones, the matchup means he will fight four times in 2011: He beat Ryan Bader in February, Shogun Rua in March and Jackson in September. Fighting this often is rare in the UFC, especially among championship-level fighters, but Jones is apparently ready, and the UFC apparently wants to keep their young star active.