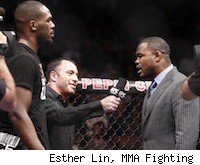 HOUSTON -- Get ready for the grudge match.

The UFC is targeting December's UFC 140 for the long-awaited Jon Jones vs. Rashad Evans light-heavyweight title bout, MMA Fighting has learned from sources with knowledge of the situation.

The fight is not yet official, but could be announced within the next 24-48 hours. UFC president Dana White told MMA Fighting that he could not yet announce a UFC 140 main event, but might possibly be able to do so by the end of the day.

Before that can happen, at least one hurdle must be overcome. Evans has to be cleared from a hand injury suffered in his recent UFC 133 win over Tito Ortiz. That injury required pins to be inserted into his right hand, but Evans' coach Mike Van Arsdale told MMA Fighting that he was scheduled to visit the doctor on Wednesday and expected Evans to be cleared.

Van Arsdale told MMA Fighting he had no knowledge of the rumored December date, but said a clean bill of health would make Evans' participation in a Dec. 10 fight feasible.

"I think if they give us any date, I can get him ready to beat Jon," he said. "I'm not overly concerned about Jon like everyone else is. My fighter has the ability, tools and the determination to beat him. As long as he's healthy, and I have eight or nine weeks with him -- and it's right around that right now, that's all I need."

Jones, meanwhile, is coming off his fourth-round submission win over Quinton "Rampage" Jackson at UFC 135 just two weeks ago. A bout at UFC 140 would mark a quick turnaround for the 24-year-old.

If UFC officials could navigate these issues, Jones and Evans will finally bring their long-held grudge to the octagon. The two were infamously once teammates at the Greg Jackson camp in New Mexico before parting ways earlier in 2011.

UFC 140 will take place in Toronto's Air Canada Centre. It will be the promotion's first time back since its massive Rogers Centre spectacle set records by drawing over 55,000 fans and an $11 million gate.

UPDATE: White strongly denied on Wednesday that Jones vs. Evans would happen at UFC 140, citing Evans' injury. So at least for the time being, UFC 140 is still without a main event.