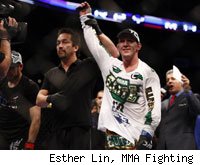 Will Gray Maynard take the UFC lightweight belt from Frankie Edgar, or will Edgar finally get his hand raised at the end of their third fight? Is Jose Aldo going to continue to run roughshod over the featherweight division, or is Kenny Florian the man to defeat him? Can Chael Sonnen return from a 16-month absence and show he's still the second-best middleweight in MMA? We'll try to answer those questions as we predict the winners for Saturday night's UFC 136 pay-per-view.

When: Saturday, the Facebook preliminary fights start at 6 PM ET, the Spike card starts at 8 and the pay-per-view starts at 9.

Frankie Edgar vs. Gray Maynard
The first time Edgar and Maynard fought, three and a half years ago, Maynard easily won, 30-27 on all three judges' cards. The second time they fought, on New Year's Day this year, Maynard obliterated Edgar in the first round, winning 10-8 on all three judges' cards. I give Edgar all the credit in the world for the way he survived that first round and fought back hard enough to earn a draw, but I think the first four rounds the two of these guys fought were more indicative of their respective abilities than the second four rounds they fought.

Edgar has better cardio than Maynard and might be able to out-work Maynard on his way to winning a five-round decision, but Maynard has superior size and strength, and I think he's going to take Edgar down, get on top of him and hurt him with ground and pound enough to win this fight, either by TKO or decision.
Pick: Maynard

José Aldo vs. Kenny Florian
Florian looked good in his featherweight debut against Diego Nunes, but Aldo is on a completely different level from Nunes. Aldo is a vicious striker whose leg kicks are likely to have Florian hobbling around the Octagon if Florian can't get the fight to the ground quickly.

If Florian can get the fight to the ground, that's when things get interesting. Aldo has a Brazilian jiu jitsu black belt, but he hasn't really been tested on the ground the way Florian has: If there's a place where Florian might have the advantage over Aldo, it's in the grappling department.

But I think Aldo's advantage as a striker is so great that by the time this fight goes to the ground, it will be after Aldo has battered Florian mercilessly, and it will be Aldo finishing Florian on the ground by TKO.
Pick: Aldo

Chael Sonnen vs. Brian Stann
The winner of this one likely gets the next shot at UFC middleweight champion Anderson Silva. The big question is what kind of shape Sonnen is going to be in after 16 months battling suspensions and legal problems: Will he be the big, physical wrestler who took Silva to the brink? Or will ring rust and age catch up with him? Stann is a good enough fighter to beat Sonnen if he's at less than 100 percent, but I think we're going to see Sonnen looking as good as ever, and earning a rematch with Silva.
Pick: Sonnen

Joe Lauzon vs. Melvin Guillard
Guillard has been on a tear lately, winning five in a row and brutally finishing his last two opponents in the first round. Lauzon's submission skills make him dangerous exactly where Guillard is weakest, but I think Guillard out-strikes Lauzon and continues his march toward lightweight title contention.
Pick: Guillard

Leonard Garcia vs. Nam Phan
Garcia is on a bad decision redemption tour. In March he lost his rematch with Chan Sung Jung, whom Garcia beat by controversial split decision in 2010. Now he's taking on Phan, whom Garcia beat in another controversial split decision in 2010. I see this one being a similarly wild brawl to their previous fight, but this time Phan rightly getting his hand raised.
Pick: Phan