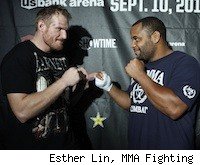 HOUSTON -- The future of the Strikeforce-Showtime relationship is expected to be decided imminently, UFC president Dana White said on Wednesday.

Zuffa co-owner Lorenzo Fertitta was in New York on Tuesday meeting with Showtime executives, and White was scheduled to speak with Fertitta after Wednesday's press conference and possibly learn the fate of the deal.

Showtime has an option to extend the deal past its current end date, which is reportedly in early 2012.

Since Zuffa bought Strikeforce in March 2011, it has taken several key pieces from the promotion to the UFC, including reigning champions Alistair Overeem (heavyweight), Dan Henderson (light-heavyweight) and Nick Diaz (welterweight). White also recently mentioned bringing lightweight champion Gilbert Melendez on board, fueling speculation that the promotion is on its last legs.

"We'll see," White said. "We're still trying to figure this whole thing out. I don't like to speak about Strikeforce that much because I'm not involved with it, I'm not the one doing it. I've purposely taken myself out of that situation. We'll see what happens, but I've got to run my business. If I have to yank him over here, I'll do it."

Fertitta has overseen Strikeforce since the purchase. Asked what he expected, White said he was unsure due to his total focus on the UFC.

"I don't know," he said, shrugging his shoulders. "I don't even want to talk about it. I'm not even involved with that thing."