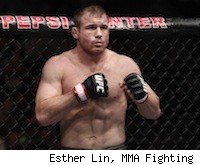 HOUSTON -- The fighting future of UFC Hall of Famer Matt Hughes may be decided by the end of October. The two-time welterweight champ and his wife are scheduled to meet with UFC president Dana White sometime near the end of the month to his discuss what is next for him after two straight losses.

Likely on the agenda: possible retirement.

Hughes will turn 38 years old on October 13, and he's struggled in each of his last two fights, getting knocked out in both. Afterward, he said the UFC would put him "on the shelf," while he debated his options.

For his part, White has his own opinion on what Hughes should do next.

"It doesn't matter what he says or what he wants to do," White said. "Hughes is going to be with us forever. Whether he talks me into doing it one more time, which I'd prefer he didn't. I'd rather see him retire. I get to this point with these guys -- him, Chuck Liddell -- these guys who dominated all these years and are a big part of growing this sport. What's next?

"Matt Hughes? Believe me when I tell you, he does not need money," White continued. "He's set. He doesn't ever need to work again. He doesn't ever need to fight again. He's got plenty of money. You're one of the greatest welterweights ever. When Georges St-Pierre is done, it's arguable. We'll see how he ends his career. But what's the point? You're going to go for another title run? You just lost. You lost by knockout. Let's hang this thing up and do something else together."

Hughes first fought for the UFC in 1999, and hasn't fought anywhere else since November 2001. His nearly 10 years of consecutive service makes him the second-longest tenured fighter on the roster behind Tito Ortiz.

He is 46-9 in his decorated career, first capturing the title at UFC 34 in November 2001 with a knockout of Carlos Newton. He successfully defended the belt five straight times, which at that time, tied a record held by Ortiz. After losing the belt to BJ Penn in January 2004, he won it back just 10 months later, beating Georges St-Pierre. He eventually lost it to St-Pierre in November 2006. Since that time, Hughes has gone 4-4.

White said he didn't know which way Hughes was leaning, but that he wouldn't be surprised to be asked for one more bout. White noted that over the years, Hughes has been an aggressive negotiator and if Hughes asks to fight again, he is expecting to hear an impassioned argument for another chance in the octagon.

But even while acknowledging that Hughes looked good for most of the first round of his UFC 135 fight with Josh Koscheck until the fight's final seconds, it's clear that for now, White hopes that Hughes goes out with dignity.

"As much as you don't want to deal with it, this is a young man's game," he said.