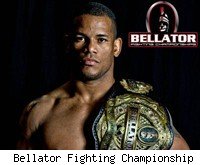 The next test to Hector Lombard's five-year unbeaten streak will come Nov. 19.

The Bellator middleweight champion will meet Trevor Prangley in a non-title 195-pound catchweight fight at Bellator 58. The promotion announced the fight Tuesday morning for the second-to-last event of its fifth season.

Bellator 58 will be the promotion's ninth event at the Seminole Hard Rock Hotel & Casino in Hollywood, Fla., which has become its favorite venue. Bellator 50 also took place there last month.

Lombard (30-2-1, 1 NC, 7-0 Bellator) has been arguably the most dominant middleweight in the world aside from UFC 185-pound champion Anderson Silva. Lombard's last loss came to Gegard Mousasi, a unanimous decision setback at Pride Bushido 13 in November 2006.

Since his draw with Noke, it's been nothing but checks in the win column for Lombard, a former Olympian in judo – 19 straight victories, with 15 coming by stoppage. He won Bellator's middleweight belt at Bellator 12, rolling through the Season 1 tournament with three stoppage wins. He defended it with a unanimous decision over Alexander Shlemenko at Bellator 34 last year.

"I just want November to get here and knock someone out," Lombard said in a statement from Bellator. "It doesn't matter who it is. I just want to do what I do, and that's win. I don't know much about Trevor, but it doesn't matter. I'll be in front of my fans in Florida, and it's going to be a show."

Prangley (23-8-1) will be making his Bellator debut and will be looking to turn around a five-fight streak that has seen him notch just one win – a split decision over Keith Jardine at Shark Fights 13 last year.

Prangley had won five straight and 11 of 12 before the recent stretch that has him 1-3-1 with Strikeforce losses to Tim Kennedy and Roger Gracie, and a draw with Karl Amoussou. In July, he was knocked out by Tatsuya Mizuno in the first round at Dream's Japan GP event.

Prangley toggles between middleweight and light heavyweight, but has spent most of his time at 205 pounds the last several years. Early in his career, he submitted Chael Sonnen, who avenged the loss three years later.

"Both of us are going to get in that cage and throw bombs, no questions asked," Prangley said. "It's no secret both of us like to stand and bang, and that's exactly what everyone is going to get. I know Hector is really tough on his feet, but so am I. So he's going to have to play my game when the cage door shuts."