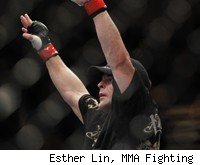 Brian Stann probably should get used to this kind of treatment from his opponents.

Stann thought he had a fight against former Pride middleweight champ Wanderlei Silva earlier this year before Silva begged out – thanks-but-no-thanks. And then came Chael Sonnen, one of the most outspoken trash talkers in the sport. Sonnen fights Stann in a middleweight contenders bout Saturday at UFC 136 in Houston.

Sonnen said fighting Stann is something that simply has to be done – but admits he wishes he didn't have to face the surging war hero, and thinks the same goes for the rest of the middleweight pack.

"Nobody wants to fight Brian, but somebody's got to," Sonnen said on a UFC 136 media call last week. "Our paths have to cross. We're just in the same weight class, it's not that big of a pool and he keeps whipping everybody. If he quit beating everybody, I wouldn't have to fight him. But he decided to go out and become one of the top guys."

Stann (11-3, 5-2 UFC), a former light heavyweight champion in the WEC, could punch his ticket to a title shot against UFC middleweight champ Anderson Silva with a win over Sonnen, who is looking for a rematch with the record-setting titleholder.

But as for Sonnen's famous mouth, which was on full display prior to his fight against Silva last year, Stann isn't surprised it didn't come out for this fight.

"I told everybody from the start I didn't think (the trash talk) was going to happen," Stann said. "I said this a couple times. I believe Chael is very genuine when he says if he has a problem with somebody, he'll speak it. If he doesn't have a problem with somebody, he won't. ... And I wouldn't have taken it personally, anyway. I really think that our skill sets and the way that we fight has generated all the hype it needs."

Stann has won three straight fights, all in dominating fashion. After a decision loss to Phil Davis at UFC 109, in which he was taken down all three rounds and dominated on the ground, Stann has been on a tear.

He submitted Mike Massenzio and UFC on Versus 2 last year, winning Fight of the Night. In January, he ran through Chris Leben on his way to a first-round TKO. The only other fighter to stop Leben with strikes? Anderson Silva. And in May, at UFC 130, Stann picked up another Fight of the Night check with his second-round TKO of the highly touted Jorge Santiago.

The UFC putting Stann in position to earn a title shot seemed natural. And Stann found out that at this level of the game, options for opponents start to thin out.

"This is the first fight where I just got a phone call and was told who I was fighting," Stann said. "Normally, there's a process, and my manager throws out a couple names and (UFC matchmaker) Joe Silva throws out a couple names. We were in that process, and all of a sudden after UFC 132, when Chris Leben knocked out Wanderlei Silva, it was 48 hours later that I got a phone call: 'This is who you're fighting. Here's the bout agreement.'"

But even though Sonnen has admitted to a bit of reluctance to fight Stann, who has become one of the UFC's biggest fan favorites, Stann doesn't think Sonnen will hold anything back on Saturday night.

"I don't think it's something where Chael's going to go lay on me Saturday," Stann said. "I still fully anticipate the best Chael Sonnen in the Octagon, and a guy who's going to to double-leg takedown me and try to push my head right though the canvas."

To prepare for Sonnen's elite-level wrestling, something he struggled with against Davis, it's not surprising that Stann has been working on his own wrestling game. The Greg Jackson-trained fighter has honed his entire game in Albuquerque, N.M., but it's wrestling he's had to work on the most.

"What happens in fighting is, early in my career I had a very limited skill set," Stann said. "But I was very comfortable with that skill set, so I could fight 100 miles an hour. When you can go somewhere where you're introduced to 1,000 new skills, you become OK at all 1,000 of them and you try to do way too much in the cage and you fight now at 70 miles an hour. It took me some time to get comfortable with all these new skills, and now I can go 100 miles an hour again. ... I've been training in wrestling for a long time now, but since that Phil Davis fight it's been something I've spent most of my time on over the last three or four fights."

If he can succeed against Sonnen where Silva failed for four and a half rounds last year (though a Silva rib injury also may have played a part in that), Stann could get his own shot at gold.

Stann and Sonnen fight on the main card of UFC 136 on Oct. 8 at the Toyota Center in Houston. The pay-per-view is headlined by a pair of title fights – the lightweight title rematch between Frankie Edgar and Gray Maynard, and a featherweight title fight between Jose Aldo and Kenny Florian.