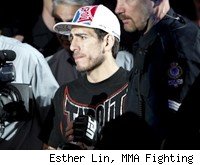 Jose Aldo has had little trouble with any opponent the last three years, but Kenny Florian thinks he might have a solution for the UFC featherweight champ.

Florian, fighting for just the second time at 145 pounds after a long stretch at lightweight – and stints at welterweight and middleweight before that – challenges Aldo on Saturday for the featherweight title at UFC 136 in Houston.

But through a career filled with many ups, and a few downs that include a pair of losses in UFC lightweight title fights, Florian believes it's his longevity that will give him the edge against the Brazilian, who is widely regarded as one of the top three or four pound-for-pound fighters in the sport.

"I think, generally, he hasn't faced a guy who's as well-rounded and experienced as I am," Florian (15-5, 12-4 UFC) said Friday during a media call for UFC 136. "I'm going to bring well-rounded skills, experience and just see where the mystique lies. That's it."

The Aldo mystique has been in full force since he stormed the WEC with five straight knockout wins, including an 8-second KO of Cub Swanson with a flying knee. The standup prowess seemed to fly in the face of the generality that Aldo, a Brazilian jiu-jitsu black belt who trains with the famed Black House team, should be devastating on the ground.

But his perfect WEC start earned him a shot at Mike Brown's featherweight belt, and once he got that shot, he continued his tear, dispatching Brown in the second. Urijah Faber took him to his first decision in nearly three years, but was never real a threat – Aldo outstruck Faber 138-27, according to FightMetric, and stuffed all nine of his takedown attempts.

After knocking out Manny Gamburyan to defend his WEC belt a second time, Aldo became the UFC featherweight champion and was given his stiffest test as champion from Mark Hominick in April. Hominick dominated Aldo in the fifth round, outstriking the clearly gassed champ 62-3.

Florian who survived a close fight against Diego Nunes in June in his featherweight debut to get his shot at Aldo. And while he didn't say getting into the later rounds with Aldo gives him an advantage, Aldo's fifth round against Hominick might give him hope that the Brazilian is beatable – especially if Florian can weather the early storm.

"He's pretty unique and a very fast, explosive guy," Florian said. "His dangerous weapons are his legs and excellent footwork. He's very, very fast and, I think, dangerous on the ground. He's definitely a unique opponent, and I had to prepare differently for him for sure."

Florian's title fight experience comes from a unanimous decision loss to Sean Sherk at UFC 64 for the then-vacant lightweight belt, then a submission loss to BJ Penn in the fourth round at UFC 101 when he got another crack after a six-fight winning streak.

After losing to Gray Maynard in a top contenders fight at UFC 118, giving Maynard a shot at Frankie Edgar, Florian dropped to featherweight. He competed on the first season of "The Ultimate Fighter" as a middleweight, quickly dropped back to welterweight after the show, then moved down to his long-time lightweight home.

But through all the weight classes, Florian said one thing has been the same – constant improvement.

"I think every fight is always going to be different," Florian said. "You're always going to have a different mindset based on your training camp, based on your opponent. I've always learned from each previous camp, win or lose. I've made a lot of mistakes and I've tightened some of those mistakes. My goal is to try and make each training camp better and better each time, and to try and increase my work load capacity and improve my skills, and I think I've done that every training camp.

"I've trained my ass off for this fight, and I'm looking forward to going out there and competing hard."

Florian and Aldo fight in the co-main event of UFC 136 at the Toyota Center in Houston. The main event is the lightweight title rematch between champion Frankie Edgar and Gray Maynard. Also on the card is a middleweight contenders fight between former title challenger Chael Sonnen and Brian Stann.