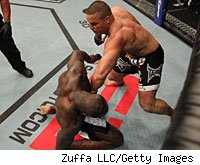 On paper, Pat Barry looks exactly like the kind of fighter who ought to be cut from the UFC. But in a sport where meaningful stats are hard to come by, the record books only tell a fraction of the story, which is good news for "HD."

Barry is 3-4 in the UFC, but he could easily be 6-1 or 5-2 or 4-3. And I don't just mean that in the purely speculative, hypothetical sense, the way the flap of a butterfly's wings could have resulted in the Nazis winning World War II. It doesn't take a gigantic mental leap to imagine a world where Barry has a winning record in the UFC. All it takes is a look at his losses and a little bit of sympathy.

Fortunately for Barry, it's the way he's gone about losing that has earned him the sympathy, which explains why he'll likely keep his job with the UFC at least a little while longer.

Consider Barry's first three defeats in the Octagon. After a successful debut at UFC 92, he dropped Tim Hague in the opening seconds of their UFC 98 bout, only to get carried away in search of the finish and ending up in a guillotine choke. He rebounded with a knockout of Antoni Hardonk, then broke his most valuable appendages on Mirko "Cro Cop" Filipovic's head before succumbing to a sloppy rear-naked choke.

Then, of course, came his infamous near-knockout (or, if you prefer, actual knockout followed by brilliant recovery) of Cheick Kongo in a bout that ended with one of the most spectacular comebacks in MMA history. Unfortunately for Barry, it also ended with him on his back, looking up at the lights.

You tweak one or two things in each of those three losses -- a more patient attack, sturdier bones, the lack of a miraculous recovery -- and Barry might be one the most successful UFC heavyweights of the past two years.

In fact, the only one of his losses that you can't explain away with some minor blunder or bizarre misfortune is his most recent loss via submission to Stefan Struve this past Saturday night. That one was utterly and purely Barry's fault, and this time inexperience and/or hyper-aggression weren't plausible scapegoats.

Not that it should matter, at least in theory. There are plenty of UFC fighters who never caught many breaks but still got cut once the losses piled up. Regardless of whether Barry could have won those fights -- or even should have -- he didn't. And in the end, isn't that what counts?

Judging by UFC president Dana White's reaction, the answer is: sometimes, but not always. Following the UFC on Versus 6 press conference, White explained that he was in no hurry to cut Barry because he "always brings it."

In other words, he's a kickboxer with an exciting style and an engaging personality, plus fans like him, so he gets a little more slack. It's the Dan Hardy rule. Most guys can't lose three fights in a row and remain on the UFC roster (some, like Gerald Harris, can't even lose one). But if the UFC likes what you bring to the table, you might get a fourth and fifth chance to halt a losing skid. It's one more reminder that this sport isn't just about winning and losing -- it's also about selling tickets.

In some cases, that results in some truly forgettable missteps (see also: Kimbo Slice). But in Barry's case, it makes for a welcome reprieve. Sure, he has some gaping holes in his game and he'll never be UFC champion -- or, most likely, even a serious contender -- but he's talented and he's fun. Even when (especially when?) he loses it makes for a memorable night, and he's always competitive, especially when the UFC is kind enough to keep him away from the heavyweight division's better grapplers.

If Barry were a wrestler with poor striking rather than a striker with poor submissions defense, he'd be cut by now. It wouldn't matter how much fun he was to interview or how narrow his defeats were. In that sense, keeping guys like Barry and Hardy around promotes a certain kind of fighting, and it's the kind the UFC thinks it can most effectively sell to fans.

But Barry (and, to some extent, Hardy as well) is a case where this system actually feels just. He's not a bad fighter; he's just unlucky. He needs work on his ground game, but at least he never bores you. Even with a 3-4 record in the organization, he's the best losing heavyweight in the UFC.

Of course, if he doesn't want to find out just how much slack the UFC is willing to cut him, he'd better pull to .500 very, very soon. Winning may not be everything, but it's still the most noticeable thing.