Frankie Edgar Focused on Gray Maynard, but Could Dual Championships Be in Future? 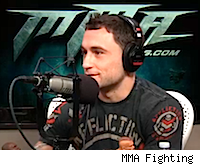 It's been over a year since UFC lightweight champion Frankie Edgar first began thinking about Gray Maynard. It was in September of 2010 when Edgar first got the call about defending his belt against Maynard. Since then, the two went through a five-round classic that ended in a draw, an announced rematch, injuries, a cancellation, and finally, preparation for this Saturday's UFC 136.

So finally, all systems are go to put the final chapter of the trilogy in motion and in the past, at which case, win or lose, both men can go on to something -- and someone -- else.

Mentally exhausted from the constant thoughts of the same threat, it's a moment Edgar is awaiting.

"It sucks, but right now is not the time to lose focus," Edgar said on Monday's edition of The MMA Hour. "I still got a couple more days to think about him, and then we could put him in the rear view."

Maynard has been the thorn in Edgar's side for the two worst moments of his career. In April 2008, "the Bully" bullied Edgar with a series of takedowns en route to a decision win. It remains the only loss in the champion's career. And more recently at UFC 125, Maynard nearly knocked Edgar out in the opening moments of the first round before Edgar bravely came back to salvage a draw.

In Edgar's mind, surviving Maynard's hail of strikes has only served to grow his belief in himself and ability to withstand adversity. And his conditioning and performance as the fight went on convinced him he can tighten up a few things and walk away with gold still around his waist.

"I'm winning, man," he said. "I'm very confident, especially after that last fight. I think my confidence keeps building from fight to fight. Obviously from BJ [Penn] to the next BJ fight. With Gray I know I had a pretty bad first round, but showing what I showed -- which I didn't realize right away until I went home and saw it -- in character, it gave me a lot of confidence."

Edgar candidly acknowledged that Maynard has advantages in size, power and wrestling, but believes he's got the edge in speed, technical striking and jiu-jitsu. He added that he believes his biggest and most important edge comes in his seamless transitions from striking to wrestling to the ground game.

After his previous troubles with Maynard, he'd like to end the series decisively and enter the next phase of his career by putting the challenger away.

As usual, Edgar will be at a size disadvantage in this one. Less than a week out from the fight, he currently weighs 160 pounds, the fighting weight of many featherweights.

Before he won the belt, he was constantly asked about moving down a division and competing with fighters that were more his size. Edgar always shrugged off the suggestion, pointing out his success as a lightweight. But interestingly, he didn't dismiss the possibility of trying to simultaneously hold the lightweight belt and moving to 145 to challenge for that title as well.

"That's something that a lot of my teammates talk about and stuff, and my coaches," he said. "Things got to work out the right way, but I think it's definitely an interesting possibility, and an intriguing one."

Edgar cautioned that though it could possibly happen, it's not quite as easy a move as some have suggested.

"It's nice to have that ace in my pocket to be able to go down there and possibly fight for the belt in another weight class," he said. "But a lot of people think you lose weight, you automatically win. You're going to be the bigger guy, but there's also ... I haven't cut weight in six years, the guys are going to be quicker. So there's a lot of other factors that play into it."

Another possibility is facing Strikeforce champ Gilbert Melendez, who UFC president Dana White said over the weekend is soon to be on his way to the organization. Melendez has frequently spoken about facing Edgar and unifying the belts, and perhaps that is an option, a possibility which Edgar accepted, saying, "it's the competitive nature. He wants to fight the best and to be considered the best."

For now, he has a big enough challenge in front of him. Edgar said his creaky back is feeling fine after a pair of epidural shots, and that he would have an MRI after the fight to reevaluate his situation.

So the future is full of potential plans and possibilities. It's about getting healthy, dual championships and unifying belts. But first, he must conquer an opponent he has yet to conquer in two tries.