Dominick Cruz: A Champ With Many Critics and No Real Challenges 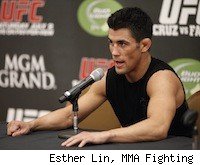 Dominick Cruz and Dana White see a big future for the UFC's bantamweight division, but for now, all I see is a one-man stomping ground. After going to plan B and still soundly defeating Demetrious Johnson on the judges' scorecards, who is going to beat Cruz? He's already beaten most of the top fighters in a somewhat thin division, and there really isn't anyone on the way up who has shown the all-around game to alter what he does and take the fight to him.

Johnson had half of the equation down on Saturday. He took the fight to Cruz, standing in the pocket and aggressively moving forward. Instead of being drowned by Cruz's volume, he threw first and often. A lot of good that did him. Johnson couldn't keep the fight where he needed, getting taken down to the mat on 10 of 19 Cruz attempts and losing handily on all three judges' scorecards.

Counting his time as the WEC champ, Cruz has now held the bantamweight title for 577 days. He's defeated Johnson, Urijah Faber, Joseph Benavidez (twice), Scott Jorgensen and Brian Bowles. Who is left for him? What is left for him? At 26 years old, is he already out of challenges?

Cruz is as dangerous a positional fighter as we have seen in lower-weight MMA. Where Urijah Faber has always taken risks that put him in danger and Miguel Torres had no problem fighting off his back, where Takanori Gomi welcomed standup exchanges, Cruz prefers battlefield tactics over brawn.

That approach is the hallmark of his success, and it's also the frustration of his critics.

With most fighters, you can say he's very good at one specific thing, like wrestling or jiu-jitsu. With Cruz, though, he's just very good at mixed martial arts.

His striking gets lauded for his footwork, but he's not exceptionally accurate, landing only 30 percent of his thrown strikes.

His wrestling was his savior on Saturday, but his career takedown accuracy? Only 56 percent. A solid number, but not elite.

He doesn't have one-punch knockout power, he hasn't submitted anyone in five years and he's not a physical freak of strength.

Somehow, these above average passing grades in all categories add up to make the division's best.

The crazy thing about Cruz's success is that he truly doesn't have a whole lot of room for error. Over and over, we hear that a fighter should never leave the fight in the hands of the judges, but Cruz has been to a decision 12 times in his career, and he's never lost one. Since becoming a Zuffa fighter, he's waited for a decision eight times, and eight times the announcer called out his name.

That's not luck. This isn't coin-flipping. Cruz is simply great at adjusting on the fly, continually exploiting small advantages and coming into every fight prepared to go to the final bell. Against Johnson, he needed it. Johnson may have won only a single round on a single judge's scorecard, but he came to give the champion a fight.

The 5-foot-3 Johnson, though, is probably better equipped to fight as a flyweight, and the strength differential was too much to overcome. If he could have stuffed a few more takedowns, the judges' job would not have been quite so easy.

Cruz said afterward that it's his aim to prove to fans that the 135-pound weight class is the most exciting one in MMA, but to do that, he's going to have to fight shadows from his past. That's because UFC president Dana White recently admitted that it would be hard not to give a rematch to the winner of November's Brian Bowles vs. Urijah Faber fight.

Faber continues to be an exciting fighter, but he has lost four straight title matches in just the last three years, and dropped a clear decision to Cruz in July. What does Cruz have to gain in fighting him again so quickly? (And frankly, at what point does Faber's chances run out?) Bowles had his fight against Cruz stopped due to a hand injury, so at least he wasn't decisively beaten.

Beyond those two, there isn't anyone who looks to be on the verge of wresting his title away.

Renan Barao is 26-1, but he's yet to face anyone in the top 10. Michael McDonald has been impressive, but he too hasn't yet moved into the upper tier of the division. Miguel Torres has lost three of his last five, so he has some work to do. In the distance, there are tumbleweeds and rematches for a fighter who's barely been threatened.

So what can Cruz do to add to his legacy? Well, finish, for one. The Bowles' fight may be a TKO on his fight ledger, but fighters don't dream of winning on an opponent's self-sustained injury. Any criticism can be somewhat muted by the fact that he's basically laid waste to the division. There's really no one on the horizon who he's not equipped to beat. But when you've proven yourself the best, the expectations only begin to grow. Georges St-Pierre gets criticized for not finishing, and Anderson Silva has faced down storms of anger at times he's been unfocused.

Cruz has stated that he wants to be the best and to carry his division to the masses. He's accomplished the first task, but to do the second requires imagination-capturing performances. And the reality is that as good as he's fought, as impressive as his romp through the bantamweights has been, fans don't fantasize about decisions being read off scorecards.