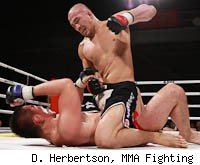 Also on the card, Yuki Kondo finally returned to form, Masaya "J-Taro" Takita put on one of the most flamboyant entrances in recent memory before choking out Shoko Sato, US serviceman Jonathan Shores made short work of Masayoshi "Randleman" Ichikawa and lightweight King of Pancrase Koji Oishi fought to a highly entertaining draw with Yoshiaki "Bancho" Takahashi.

Kazushi Sakuraba pupil Takanori Sato attempted to channel his mentor in his second welterweight title defense, seeking the kimura for three rounds against Grabaka's Eiji Ishikawa, but ultimately coming up short and instead being forced to settle with a split draw.

Ishikawa controlled the early portion of the bout, landing better blows, scoring takedowns and landing hammerfists while defending the incessant kimura attempts on the canvas But as Ishikawa started to tire the submission attempts became more effective and Sato came close with an armbar attempt and multiple kimura's in the last period, making the fight an impossible one to judge and leading to a split draw.

In the most entertaining bout of the evening, lightweight King of Pancrase Koji Oishi fought to a unanimous draw with Paraestra Hachioji's Yoshiaki "Bancho" Takahashi. Oishi kept his taller opponent pinned against the corner posts during the two-round bout, but both fighters were extremely active and able to create space to knee, hook and uppercut from close range. Takahashi arguably landed more blows but Oishi's control of the bout evened the scorecards on all three judge's cards.

Sengoku veteran Kenta Takagi's lack of options on the ground proved to be his downfall against Sajiro Orui. Takagi presented a significant threat with his fists and knees on the feet but Orui's relentless takedowns and smothering control ensured that the judges ruled in his favor.

Former King of Pancrase and one-time UFC title contender Yuki Kondo finally had a return to form, picking up his first win in five outings with a solid decision over Yuta Nakamura. Kondo was especially impressive with his kicks, throwing constantly to the legs, body and head. Nakamura's chin was solid enough to see him retain consciousness through multiple clean headkicks, but aside from some winging hooks he never found his range and so Kondo took the unanimous decision. 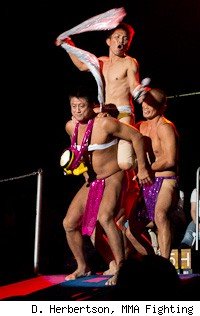 When you choose to enter the ring waving a sparkly boa while riding a motorcycle made of men wearing glittery thongs (pictured right), you really need to make sure you win. Fortunately Masaya "J-Taro" Takita was able to back up one of the most eccentric entrances in MMA history, putting Sengoku veteran Shoko Sato to sleep in the second round with a rear naked choke. Sato punished the heavily bandaged knee of Takita with cracking low kicks during the first round of the fight, but a takedown into back control led to the rear-naked choke and Sato was asleep after three minutes in the second stanza.

2011 Pancrase NeoBlood Rookie Tournament MVP and US serviceman Jonathon Shores picked up the biggest win of his promising career, blasting Masayoshi "Randleman" Ichikawa with a right straight to finish the fight only 2.10 into round one. Shores missed with a guillotine attempt early and was slightly stiff with his movement on his feet but the massive size and power disadvantage ultimately proved too much for Ichikawa.