Falling Action: Best and Worst of UFC on Versus 6 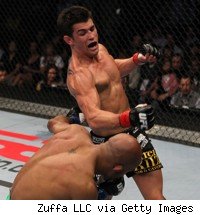 It's not often that we see a title fight on free TV. As expected, Saturday night's bantamweight contest at UFC on Versus 6 provided the full 25 minutes, and maybe showed some fans the difference between the lumbering heavyweights at the top of the MMA food chain and the swift little hummingbirds in the lighter divisions.

The 135-pounders may not be long on finishing power, but at least they keep coming without slowing down. They don't overwhelm, but they also don't run out of gas halfway through. Either you appreciate that or you don't. After the performances of some of the heavyweights last weekend at UFC 135, I'm guessing a lot of fight fans do.

But now that another one is in the books, it's time again to sift through the biggest winners, losers, and everything in between from UFC on Versus 6.

Biggest Winner: Anthony Johnson
He said he wanted an exciting finish to silence the critics who weren't too pleased about his strategy in the Dan Hardy fight. Kicking Brenneman in the face until he fell down was a good way to go about that. Fight fans have short enough memories that a good TKO win will make them forget all about the time you promised a slugfest and delivered a wrestling match instead. All it took was him placing his foot across another man's face in as violent a fashion as possible. A very simple and reliable formula for changing public perception if there ever was one.

Biggest Loser: Charlie Brenneman
Fresh off his big win over Rick Story, he gets TKO'd by "Rumble" Johnson in a fight he was never really in. He can complain all he wants about the stoppage, but even before he got kicked in the face he was on wobbly legs, clinging to the fence rather than guarding his head. Maybe he could have fought on, but he wasn't doing much fighting when he took a foot to the grill. I can't blame a referee for watching that scene unfold and then deciding Brenneman was done. Now he goes from late-notice hero to just another welterweight in a crowded field. The fall was only slightly quicker than the rise, but looked far more painful.

Most Perfunctory Title Defense: Dominick Cruz
Okay, so it wasn't the most dominant or impressive victory of his career. He looked mildly vulnerable at times and, most shockingly, even a little bit tired. Still, Cruz controlled the fight down the stretch and did what he had to do, so he goes home with the hardware. Was it a breakout performance that will make him a huge star? Probably not, but any night you leave with the title that you showed up with is a good night indeed. Cruz remains the best 135-pounder in the world, and he showed that he can dig down and gut one out when he needs to. In fact, the only thing he lacks at the moment is fresh, compelling challengers. Unfortunately for him, there's not a lot he can do about that.

Worst Use of a Reach Advantage: Stefan Struve
While the fight stayed standing, he did very little to keep Barry at a distance. Despite having arms and legs that were about the size of Barry's entire body, he just kept letting the smaller man walk him down. In fact, of all the problems Barry had in the fight, getting within striking distance seemed to be the least of his troubles. It was only once the fight hit the mat and Struve was on his back that he managed to put his long limbs to good use, locking up a triangle choke that Barry really should have seen coming. Again, Struve's submissions game continues to sneak up on opponents, though it honestly shouldn't. He's won more fights that way than he has by any other method, so when will people stop thinking that it's a good idea to grapple with him? As long as he uses his range so much better on the ground than he does on the feet, there's little reason to take the Dutchman down.

Mr. Consistency: Paul Sass
I've heard MMA trainers say that what they really want is not a guy who can pull off every submission in the book, but a guy who has one or two good ones that he can nail on command. Sass has the triangle choke and the heel hook, and he doesn't need anything else. With his heel hook of Michael Johnson he remained unbeaten in twelve pro fights, and he's ended with a submission in eleven of those. You'd think that any opponent would be able to take a quick look at his record and know what to watch out for, and you'd be right. The fact that he keeps pulling those moves off anyway tells you just how good he is.

Most in Need of a Ground Game: Pat Barry
He's a great kickboxer and a likeable guy, but at times it seems he can be finished by the merest suggestion of a submission. I don't care how vicious your leg kicks are, if you can't defend against a triangle choke any better than that you have a very limited future in the UFC. Barry's had plenty of time to develop his overall game, and he has improved. Just not enough. The UFC has been somewhat kind to him in terms of matchmaking, largely keeping him away from the better grapplers in the heavyweight division, but still he finds ways to get submitted. It's a shame, because he's a lot of fun to watch when he's in his element. It's when he's not that it gets ugly in a hurry.

Most in Need of an Ice Pack: Demetrious Johnson
He showed a lot of heart and did much better than most expected, but he's still going home with a lump the size of a cueball in his face. That's not something you can cover with a pair of sunglasses, either. All it takes is for you to roll over on it once in your sleep and your whole night is ruined. Though of course, losing a title fight probably has a similar effect.

Narrowest Margin of Victory: Matt Wiman
Watching him bounce around while the decision was read, I had a flashback to Wiman's mini-freakout after the judges sided with Dennis Siver over him at UFC 132. That night he bolted from the cage like he'd left his car running out front. If the decision had gone the other way this time, he might have taken off through the streets of D.C. and been halfway to Florida by now. Fortunately for Wiman, he got the nod from the judges, but just barely. A guy who can't take it when a squeaker doesn't go his way should really learn to stop leaving it up to the judges. Or if he is going to go the distance, he could at least make it a little clearer who the winner and the loser was. Keeping it that close is a good way to go home disappointed.