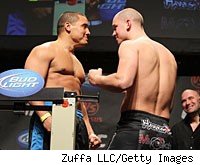 This is the UFC on Versus 6 live blog for Pat Barry vs. Stefan Struve, a heavyweight bout on tonight's UFC Live card from the Verizon Center in Washington, D.C.

The fight, according to UFC matchmaker Joe Silva, is the biggest height discrepancy in UFC history. Struve (21-5, 5-3 UFC) is the UFC's tallest fighter at 6-foot-11. Barry (6-3, 3-3 UFC) is 5-11. Both fighters are coming off knockout losses. Struve was stopped by a Travis Browne Superman punch at UFC 130 in May. Barry fell victim to Cheick Kongo's already legendary come-from-behind knockout at UFC on Versus 4 in June, moments after it appeared Barry had Kongo out on his feet with the fight about to be stopped.

A loss for either will be the first losing streak of his career.

Round 2: Dan Miragliotta tells the two they have to "step it up." So let's see what happens. Inside leg kick from Struve is answered by a nice uppercut from Barry – and I mean seriously, UPPERcut. He had to in order to reach. Big left head kick from Barry gets to Struve's right shoulder shortly after. Then an outside leg kick from Barry. Combo to the head, then a kick to the outer leg by Barry, and Struve answers with a nice kick of his own. We trade soft leg kicks with about 2 minutes left. Struve briefly tries to tie Barry up in a clinch, but Barry pushes out of it, wary of the potential for Struve's knees. Struve throws a kne, and Barry answers with a left. Struve ties him up and tries for a guillotine. Barry is in side control and in a choke. He gets out, but Struve gets a triangle. It's deep. Barry amazingly picks Struve up with the triangle still on, and drops a massive slam. But Struve still has it, and Barry has to tap. It's the first two-fight skid of Barry's career.

Result: Stefan Struve def. Pat Barry, submission (triangle choke), 3:22 Round 2
"I've been working on my kickboxing and my reach. I'm thrilled with the result. But give it up for Pat. He's one of the coolest dudes in MMA," Struve tells Joe Rogan after the fight.