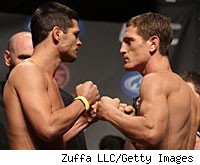 This is the UFC on Versus 6 live blog for Mac Danzig vs. Matt Wiman, a lightweight bout on tonight's UFC Live card from the Verizon Center in Washington, D.C.

The bout is a rematch from a controversial fight at UFC 115 in June 2010 that Wiman (13-6, 7-4 UFC) won by submission when Yves Lavigne stopped the fight, though Danzig (20-8-1, 4-4 UFC) never tapped or lost consciousness. The two were scheduled to meet three months later, but Danzig was forced off Fight Night 22 with an injury.

Danzig, the TUF 6 winner, returns for the first time since a knockout win over Joe Stevenson at UFC 124 in December. Wiman had a three-fight winning streak snapped at UFC 132 with a decision loss to Dennis Siver.

Round 1: The rematch is ready. Wiman takes the center and opens with an inside leg kick, then gets aggressive with some punches. Danzig ties him up and lands some nice uppercuts. Then lands some knees in the clinch. Body-head from Danzig, and he pushes Wiman to the cage. Wiman answers with elbows, and Danzig throws a head kick that is on the money – but is caught by Wiman. Wiman takes the fight to the ground and has Danzig pressed against the cage. But Danzig works his way back and looks for a choke while Wiman holds on to Danzig's left leg. Guillotine attempt from Danzig, and when he can't hold on he starts lobbing several strikes to Wiman's head that find the mark. Danzig's last fight won Knockout of the Night. Wiman comes with a combination that pushes Danzig to the cage. Traded elbows in the center, and Danzig looks for a headlock. Right hand, then left hook from Wiman. Danzig goes body-head yet again, but Wiman backs him up with a knee. Wiman with a left kick then a shot to the body has Danzig on the fence. Danzig is cut around his nose. Nice right from Wiman is answered with a kick to the body by Danzig. Wiman gestures to a backpedaling Danzig to come forward. More body shots from Danzig. It's a pretty even first round – very tough to score. Since going 10-10 is taking the easy way out, we'll give a very close 10-9 first round to Wiman.

Round 2: Wiman takes the middle first and eats a leg kick. Big right from Wiman misses, and Danzig ties him up and lands some body shots. Wiman looks for elbows in close and hits some while eating some Danzig short uppercuts. Wiman takes the fight to the wall, then scores a big takedown into half guard when they move back to the middle. Danzig briefly gets to side control before Wiman gets back to full guard. Wiman throws up a triangle attempt and tries to work on an armbar. He's got it. Danzig tries to get out of this thing, but Wiman's got him good. Danzig goes low to keep the leverage away, and he is able to break the hold. He lands some good ground and pound shortly after, then gets to half guard. Again Wiman gets an arm and tries for a kimura. Again Danzig gets out and lands some ground and pound. Wiman gets back to his feet, then eats a short flurry from Danzig. With a minute left, Wiman comes forward and lands some good shots. Leg kick from Wiman. He shoots, but misses and Danzig counters with some good strikes. It's a close second round, with Wiman scoring points for the submission attempts, but Danzig scoring on the takedown and getting the better of the striking game. Close again, but we'll give the second to Danzig 10-9.

Round 3: Superman punch from Wiman misses, and he throws a kick afterward. Nice uppercut from Wiman after a Danzig combo in the clinch. Wiman appears to be coming forward more, and that may wind up being the difference if this fight goes to the judges. Nice elbows from Wiman in the clinch as they trade position on the cage. It's pretty clear this is tonight's leading Fight of the Night candidate so far. Wiman's takedown attempt is stopped, and he counters with a big right to the body. Danzig's corner yells that Wiman is gassing, but Danzig looks tired, too. More elbows from Wiman, and the two trade looping flurries before breaking. Wiman shoots for a single, drops down, and now has Danzig on top in half guard. Wiman is bleeding from his nose, and Danzig is going for Wiman'd back. With half a round to go, Danzig takes Wiman's back and tries to get hooks in for a choke. But Wiman defends, shakes him off and Wiman winds up on top in half guard – that may have been the most critical point in this fight. Big elbows from Wiman on the ground. Danzig trying to get up but it's not happening yet. Danzig's face right now is the second worst of the night after Keith Wisniewski on the prelims. Danzig trying to get up with a wall walk, and finally does. He's got 35 seconds to make something happen. The two trade elbows and short uppercuts on the fence. Wiman drops down looking for another takedown. Danzig throws on a guillotine at the end of the round, but Wiman gives thumbs up to the ref that he's OK. Danzig has it for only five seconds or so before the final horn sounds. It's another great round, very exciting, and likely a Fight of the Night winner. But we'll give the third round to Wiman 10-9 and the fight to him 29-28.