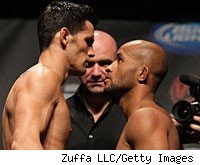 This is the UFC on Versus 6 live blog for Dominick Cruz vs. Demetrious Johnson, the main event bantamweight title fight of tonight's UFC Live card from the Verizon Center in Washington, D.C.

Cruz (18-1, 1-0 UFC) defends his bantamweight title for the fourth time. His first three successful defenses were decision wins over Joseph Benavidez, Scott Jorgensen and Urijah Faber. The win over Jorgensen came at the final WEC event, after which Cruz's WEC title became a UFC belt. Johnson (9-1, 2-0 UFC) has won three straight, including a somewhat controversial unanimous decision win over former champion Miguel Torres at UFC 130 in May. That win got him a shot at Cruz's belt.

Round 1: They're saying this may be the fastest-paced fight in the the history of the UFC, and it's hard to argue. It will be hard to keep up. Both fighters throw some kicks, and Johnson comes forward as Cruz backs up. Johnson shoots for a takedown 50 seconds in, but Cruz stuffs it and lands some shots. Cruz then gets off a nice throw as Johnson hits the canvas, and Cruz works to the top and tries to pass to side control. Johnson defending nicely so far as he looks to escape. Johnson continues to defend and gets to half guard, then butterfly guard. Finally, Johnson quickly gets out and back to his feet. Head kick from Johnson is caught by Cruz and Cruz takes the fight to the ground. Short-lived leg lock from Johnson turns into an escape from Cruz and side control. Back on the feet, Johnson lands a short takedown against the fence, but Cruz gets back up quickly and Johnson ties him up with a clinch, looking for short knees and elbows. Cruz ducks under nicely and gets out, but Johnson makes him pay with a couple shots as they break. Nice kick from Cruz. It's a close first round, but it's a round for the champ – 10-9 Cruz.

Round 2: Johnson comes forward very quickly again, and Cruz has to tie him up and it leads to a good takedown. Cruz has Johnson backed against the fence. As Johnson gets back up, Cruz lands a nice knee to the head. But Johnson shakes it off and pushes Cruz's back to the fence. Another good knee from Cruz on the break. High kick from Cruz misses, and one from Johnson is blocked. Johnson shoots quickly, but Cruz stuffs it and we trade positions on the fence. They trade knees in the clinch on the fence. Halfway through, it's another fast-paced and close round. Johnson drops down for a takedown, but it's not there. Cruz just misses a big knee, and they split apart. Johnson lands a nice right, then comes with a flying knee that just misses, then a head kick that just misses. Good knee from Cruz, and Johnson shoots for a takedown that is mostly stuffed. Cruz then gets a soft takedown on the fence, and Johnson goes into butterfly guard. Cruz isn't doing much from the top, but it probably gives him the round. We'll give Round 2 to Cruz, 10-9.

Round 3: Good kick from Cruz, but Johnson still comes forward and throws a kick of his own. Nice right-left from Johnson inside. Cruz throws a jab, then goes for a takedown that Johnson stops. But Cruz ties him up, then throws a gorgeous suplex. Cruz takes Johnson's back and flattens Johnson out. He's got a right arm under and is looking for a rear naked choke to end it. He's got it, both palms clenched together. But Johnson gets out, and Cruz gets the hold back immediately, then tries to turn it to a neck crank. But miraculously, Johnson escapes, gets to his feet, and gets off some offense along the fence. Cruz looks tired from the choke, but with 1:40 left, he shoots and gets another takedown and settles into Johnson's butterfly guard on the fence. We've seen this spot before, and Cruz has done very little with the position. Johnson will look to wall walk back up. Crauz works some minor ground and pound and keeps Johnson pinned down. Finally, with 20 seconds left, Johnson gets back up. They trade some knees to the body along the fence as the round closes. It's a 10-9 round for Cruz as we move into the championship rounds.

Round 4: Cruz has been this deep before. Johnson has not. He looks fresh as ever, though. Maybe fresher than Cruz. Inside leg kicks land for each. Spinning kick from Johnson misses. Looping left grazes Johnson, and he follows with a leg kick. They trade jabs and uppercuts that mostly just miss. Johnson appears to sting Cruz with a left, but Cruz moves in for a takedown along the fence – and gets it again. More butterfly guard for Johnson against the fence. Johnson continues to defend well from here, but as Cruz tries to pass, it is able to get his left leg out and gets to full mount. Johnson is holding on to Cruz to defend, and Cruz isn't doing much with the position. Johnson quickly gets back to guard. Johnson gets back up with 90 seconds left and pushes forward look ing for some hands to the face. Cruz takes a deep breath with a minute left, and then is nipped by a Johnson right. They clinch up again, but Cruz bullies his way to half guard on the mat. When Johnson powers up, Cruz lands a nice kick and a punch, and Johnson just misses a couple shots as the round closes. It's another 10-9 round for Cruz, and we have him up 40-36 going to the final round.

Round 5: Johnson comes hard to open, and JUST misses a big head kick that had all kinds of bad intentions. After a short potential flurry of just-misses, Cruz ties him up again, then lands another big suplex that might have been better than his first one that came in the third round. Johnson works to get back to full guard, and he gets there. Cruz tries to work some elbows from up top and shots to the body. The referee tells them to stay busy, and Johnson works back over to the cage to try to wall walk. Cruz is keeping him down, but halfway through Johnson gets back up. He has a half-round to land a knockout punch or a submission, is what it comes down to. And he does land a couple uppercuts and a kick as they break. But Cruz is like the mothership in "Independence Day": Target remains. Another takedown from Cruz, but Mighty Mouse pops back up and looks for a tie up. But Cruz throws him again. Cruz has to survive 90 seconds to retain, and Johnson needs to swing for the home run ball. He comes forward, Cruz ducks under and shoots for an easy takedown. He then quickly passes and gets to full mount with 50 seconds left. He looks for Johnson's back and Cruz is looking for a rear naked choke to end it. But Johnson gets out, and Cruz gets a knee in as they break taht seems to hurt. Cruz gets one final takedown to end things. We have it 10-9 for Cruz and 50-45 for Cruz in the fight. We might hear a 49-46, but this should be fairly unanimous and a sweep or near sweep for the champion.

Result: Dominick Cruz def. Demetrious Johnson, unanimous decision (50-45, 49-46, 50-45)
"I've been putting in a lot of work, and it was a tough fight," Cruz told Joe Rogan after the fight. "The kid's got a sick pace, so I had to outwrestle him. He didn't surprise me. I was ready for a wicked grind, and a wicked pace. You've got to be able to switch up – you can't fight everyone the same. I was looking for the finish – I had the choke in twice, and he toughed it out. He was gurgling and he just toughed it out, but that's what you do for title fights."