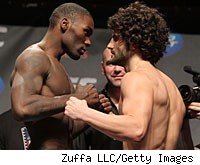 This is the UFC on Versus 6 live blog for Anthony Johnson vs. Charlie Brenneman a welterweight bout on tonight's UFC Live card from the Verizon Center in Washington, D.C.

Johnson (9-3, 6-3 UFC) returned in March after a 16-month layoff and won a unanimous decision against Dan Hardy. But an injury forced him out of a fight with Nate Marquardt in June, a bout that became Rick Story vs. Brenneman the day before the fight. Brenneman (14-3, 3-1 UFC) won that bout, after having his previous fight on the card scrapped earlier in the week, snapping Story's six-fight UFC winning streak.

Round 1: Johnson should have a significant size advantage, as he's regarded as the biggest welterweight in, like, ever. Brenneman catches a leg kick, then backs way out of a Johnson attack. Johnson tracks him down and throws a straight kick that Brenneman avoids. Brenneman trying to hold on on the ground, but Johnson is working some big fists on the ground. Johnson is holding Brenneman's head down with his right hand and is l anding strikes with the left. It's a bad spot for Brenneman, and now Johnson starts to light him up with knees to the body. Johnson spins to try to take Brenneman's back. Brenneman wriggles his way back to half guard, then looks for an arm-in guillotine. Johnson stays busy and gets out. He just misses a kick, but Brenneman scrambles out. But after Brenneman gets up, Johnson telegraphs a huge left kick to the face. Brenneman drops to his butt immediately, and Mario Yamasaki steps in to stop it. Brenneman immediately pops up wondering why it was stopped – and it appears he's completely fine. It's the third potentially bad stoppage of the night, but Johnson is going to have a TKO victory.

Result: Anthony Johnson def. Charlie Brenneman, TKO, 2:49 Round 1
"I'm very happy. Everyone was talking crap about my last performance against Dan Hardy, so I figured I had to come out here and make a statement. I told Charlie, he was the first guy to ever have me nervous. His wrestling is so good, and I respect him and his camp so much," Johnson told Joe Rogan after the fight.