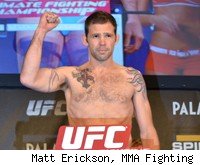 Tim Credeur, who returned to the UFC in June after a nearly two-year layoff, has been forced out of UFC 137 later this month.

Stepping in to take Credeur's place against Brad Tavares on the pay-per-view card in Las Vegas will be UFC newcomer Dustin Jacoby. Jacoby's trainer, Marc Fiore, made the announcement on his Facebook page and Twitter feed Saturday morning. The UFC has not yet announced the change, and Credeur vs. Tavares was still listed on the official fight card at UFC.com on Saturday morning.

UFC 137 takes place Oct. 29 at the Mandalay Bay Events Center and features a welterweight title fight between champion Georges St-Pierre and Carlos Condit, plus a co-main event between BJ Penn and former Strikeforce welterweight champ Nick Diaz.
More: UFC 137 Fight Card: St-Pierre vs. Condit
Credeur (12-4, 3-2 UFC) started his UFC career 3-0 with stoppages of Cale Yarbrough, Nate Loughran and Nick Catone. But after a Fight of the Night decision loss to Nate Quarry at UFC Fight Night 19 in September 2009, it took Credeur 21 months to get back. An injury forced him out of a bout at Fight Night 20, and then an abnormal brain scan before UFC 113 kept him on the shelf for more than a year.

Credeur returned at the TUF 13 Finale in June, but lost in 48 seconds to an Ed Herman TKO. Herman also had been out for nearly two years thanks to a severe knee injury.

Jacoby (6-0) turned pro last November and has been on a tear throughout the Midwest. The 23-year-old central Illinois native has six stoppages in his six wins, five of them in the first round. He has been working with Fiore at the H.I.T. Squad gym near St. Louis, which Fiore co-founded with UFC Hall of Famer Matt Hughes. Fiore is scheduled to open his own MMA gym in Springfield, Ill., next month.

Tavares (7-1, 2-1 UFC) was a semifinalist on Season 11 of "The Ultimate Fighter," where he lost to eventual champ Court McGee. Tavares started his official UFC career 2-0 with wins over Seth Badzynski and Phil Baroni before a unanimous decision loss to Aaron Simpson at UFC 132 in July.