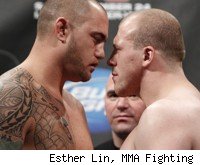 DENVER -- This is the UFC 135 live blog for Travis Browne vs. Rob Broughton, a heavyweight bout on tonight's UFC pay-per-view from the Pepsi Center.

Round 1: Browne's size advantage is evident as soon as they meet in the center. He swings big and misses, nearly toppling over, then does it again a few seconds later. Browne clinches up and muscles Broughton up against the fence. The big American should have the edge there, but can't do much with it before they separate. Good leg kick by Browne, then a front kick that gets right in Broughton's face. Broughton clips him with a hook but eats a right in exchange. Browne flicks out another kick as the crowd grows restless. Broughton keeps coming, doing most of the forward movement so far but having trouble getting close enough. Browne backs up with a good left hook, but then follows with an ill-timed jumping knee from way too far out and ends up in the clinch. Browne grabs a single-leg and flings Broughton to the mat easily, getting the mount and launching some wild elbows before the horn sounds. MMA Fighting scores it 10-9 for Browne.

Round 2: They touch gloves to start the second and Broughton comes forward with his jab, but still seems to be having some trouble with Browne's reach. Browne throws out a series of feints that seems to confuse even him, then concludes with a single leg kick. A long walk for a short slide there. Broughton catches one of Browne's high front kicks, but can't do anything with it. The crowd gets a little boo happy, and in response Browne opens up with a flurry of punches that forces Broughton back. Browne grabs a clinch and fires off some knees, but Broughton has his defenses up. The pace slows back down and again the crowd expresses its disapproval. Two good leg kicks by Browne have Broughton limping ever so slightly, but he keeps hooking his way forward nonetheless. Browne grabs that single-leg in the final minute once again and, in a carbon copy of the first round, goes to mount and fires off a couple elbows that can't quite find their mark. Broughton rolls to defend and manages to ride out the round without suffering too much damage. MMA Fighting scores the round 10-9 for Browne.

Round 3: Broughton is bouncing around the start the final round, and Browne chops at his legs with some kicks to take that spring out of his step. Broughton continues walking Browne down and lands a nice looping right following a hook. Browne again takes him down and this time lands a nice right hand from the top before moving into half-guard. Browne is looking tired, like he might not mind just hanging out on top until this one is over. Referee Josh Rosenthal is looking like he might stand them up, however, so Browne looks to pass and nearly takes Broughton's back as he rolls to his stomach. Browne back in full mount now, and Broughton might as well be glued to the mat. The fans don't like the way this one has slowed to a crawl, but hey, the big guys are tired. Broughton recovers guard and is thinking about a kimura. He has the arm isolated, but Browne takes the opportunity to pass his guard and there goes all his leverage. Broughton works back to his feet in the final ten seconds, and the boos nearly drown out the horn to end the final round. MMA Fighting scores it 10-9 for Browne, who likely won the fight but didn't score many style points in the process.