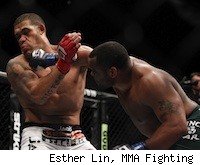 Daniel Cormier knew his right hand was broken almost as soon as it connected with Antonio Silva's head, but it took a while for the pain to set in.

"It was just the adrenaline," he told MMA Fighting this week. "I was on such a high."

Maybe that explains why Cormier kept hitting Silva with his broken hand throughout the first round of their Strikeforce World Heavyweight Grand Prix semifinal bout, and why he thinks it was lucky for him that the fight ended in the first round.

As Cormier explained, "If we'd have fought 15 minutes, I'd have kept throwing that thing all 15 minutes."


It was only when the Strikeforce heavyweight and former Olympic wrestler woke up on Sunday morning that the pain really set in. Then he knew it was almost certainly broken, and a trip to the doctor back home confirmed his suspicion.

On Friday, Cormier's hand goes into a cast for the next six to eight weeks. During that time he plans to work on improving his kicks and his cardio, he said, but even when the cast comes off he doesn't know how long it will be before he's able to "start punching" and get back into full training and sparring mode.

It's a difficult situation, since he doesn't want to rush it and end up re-injuring himself. Then again, he knows Strikeforce wants to wrap up the Grand Prix in the first quarter of 2012, which means he needs to be ready to fight fellow finalist Josh Barnett by then or else risk being replaced.

"This is terrible for me, man," Cormier said. "This is worst-case scenario. With when they want the fight to happen, and me being the kind of guy who wants to deliver those type of fights, to have an injury like this. The thing that makes it so difficult is, I think Josh is so good. I need to have a ten-week training camp to prepare for that fight, so this is worst-case scenario for me."

As Cormier sat at the post-fight press conference last Saturday night, listening to Strikeforce's Scott Coker saying that the organization "would consider another fight" if Cormier wasn't available in time for the finals, he wasn't terribly shocked, he said.

"I guess I was thinking that the show has to go on. I really do want to be a part of it. It means a lot to me, knowing I got this opportunity, and I saw that [Grand Prix] belt and I instantly wanted that belt. I want to be one of the champions in Strikeforce, because that's where I started. It's where I had my first fight. ...But I can't act that surprised, because I got my opportunity [to join the Grand Prix] for the same exact reason."

The last time Cormier had an injury this serious was when he broke his arm wrestling in 2002. That healed faster than doctors expected, he said, so he's "just hoping I have something in me that makes me heal fast so I can start training, and get the type of training camp I need to fight Josh."

Cormier's big concern is not just that he won't be ready in time, he said. While Strikeforce hasn't announced a date for the Grand Prix finals yet, he should be out his cast by mid-November and could be ready to start sparring at least by early 2012, if not sooner. But will that leave him enough time to get a full training camp in before he fights Barnett? And if not, what then?

"Everybody always tells me that I made big improvements from fight to fight to fight," Cormier said. "Well, if I'm injured for two months, what if I don't make that much of an improvement from my last fight to the fight with Josh? That's why I say it's worst-case. This is the fight where I have to make the most improvement just to be where I need to be to beat the guy."

As Cormier sees it, "I have to win this fight."

And yet, with his right hand in a cast for the next six to eight weeks, there isn't a whole lot he can do at the moment to move himself closer to that goal. Maybe the best he can do now is wait and hope.