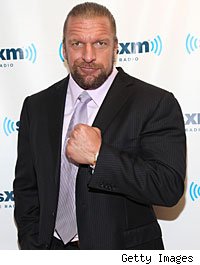 MMA and pro wrestling are not the same thing. Both Dana White and WWE insist they are not trying to force viewers to pick a side, but pay-per-view buyrates and TV ratings have positioned the two to go head-to-head in the eyes of the public.

One man who has a unique perspective on the fan-built feud between MMA and pro wrestling is WWE superstar Triple H. In addition to still competing in the squared circle on TV, the WrestleMania headliner is poised to inherit the company from his real-life father-in-law Vince McMahon. And since Vince McMahon is basically synonymous with pro wrestling, there will come a day when Triple H possesses that same global influence.

While promoting the newest WWE Studios film 'Inside Out' with AOL Moviefone, the conversation moved to how he thinks UFC needs to learn from WWE, and as well as Brock Lesnar's controversial exit from WWE. Click after the jump to read interesting comments from the man who will one day shape the direction of pro wrestling.

Moviefone: How do you think WWE and pro wrestling needs to evolve as UFC and MMA grows in popularity?

Triple H: I don't think we have to evolve. It's two totally different things. I think now especially there's this thing like, "oh it's very similar."

I don't see us needing to evolve to what UFC does because quite frankly sometimes the fights are long and boring, guys lying around and sometimes the fights are fast and over in five seconds. I've always thought one of the things about us, if you look at us solely from a sports standpoint, is that we always give you a good show. We're never going to give you a crap game.

I think if anybody needs to evolve, it's them. Give more of an entertainment standpoint. Give more form; they just have fighters who walk in in T-shirts and shorts and just stand there and then they fight and then they win and then they go "thanks, I'd like to thank my sponsors" and then they leave. The whole world was up in arms when Brock was flipping people off and was cussing at the beer company because they didn't give him any money and everyone thought, "oh my god, he's disrespectful," -- the whole world was talking about it. They couldn't wait to see him get beat up. And then he did well, and he beat some guys and then people jump on his bandwagon going "Brock's the greatest." I'm good friends with Floyd Mayweather and Floyd would be the first to tell ya, "I make the most money in boxing and I have the biggest buyers because I have the biggest mouth." He'd be the first guy to tell you that. That's what it's about. Sports is entertainment.

Looking at something like the recent Grantland expose on Ric Flair, it seems like the problem is some pro wrestlers run their mouth too much.

Ric is one of my best friends. Ric doesn't know when to walk away. Ric doesn't want to be told to walk away. And Ric can't afford to walk away. Ric has lived every day of his life like it's the last for almost the fifty years he's been in the business. In Ric's mind, it's still 1982, he's on top of the world, he's young, he's got a lot of money. Ric has never questioned spending. We have a term on the road where if you go out and you have a crazy night that you spent a ludicrous amount of money or you just lose it one day and you can't go through another airport and you're trying to get a jet instead, we call it "Naitching." Ridiculously spending money for no point is called "Naitching."

But Brock left wrestling under controversial terms because he chose to walk away while he was still young, rather than stay on for too long.

Well [the terms] weren't controversial. Brock's a country bumpkin. And I don't mean that in a derogatory way. Brock just wants to be on his farm and he doesn't like being famous. He doesn't want to be bothered. Before he left, he was talking about buying a prop plane, and hiring a guy to fly him so he wouldn't have to go to airports ever. He could just literally fly from town to town so he wouldn't have to see anybody, go to the building and wrestle. That's the one thing about what we do for a living: you go to the ring twenty minutes every night, it's the highlight of your day. But you're on the road a couple 100 days of the year, that twenty minutes a night, that is the juice.

The rest of the time is the pain-in-the-butt stuff that you have to do to get you to the twenty minutes a night. It's the flying, it's the airports, the hotels, it's the rent-a-cars. You go through all of that stuff to get to that twenty minutes of adrenaline and then you go to the next town and you do it all over again. And Brock just couldn't deal with the other twenty three hours and forty minutes of the day outside of his 20 minutes in the ring. He loved that twenty minutes in the ring. The rest of it? Not so much.