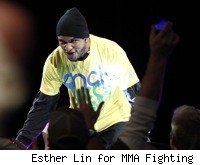 Maximo Blanco's run in Strikeforce has come to an end after just one fight.

Blanco's manager, Brian Butler-Au of SuckerPunch Entertainment, confirmed with MMAFighting.com on Wednesday that the Venezuelan fighter has been moved from the Strikeforce lightweight division to the UFC featherweight division effective immediately. No word just yet on when Blanco will debut in the UFC.

As Butler-Au put it, "145 looks like a better fit for Maxi," who has never fought at featherweight before.

The 27-year-old lost via submission to Pat Healy in his Strikeforce debut this past Saturday night. The loss snapped his six-fight winning streak and dropped his record to 8-3-1 (1 NC).

Prior to signing with Strikeforce, Blanco had fought for World Victory Road and Pancrase.