'Mayhem' Miller: Arrest for Assaulting Sister 'Now All Over With' 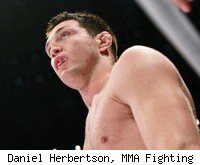 UFC middleweight Jason "Mayhem" Miller said on Monday's episode of The MMA Hour that his arrest for allegedly assaulting his sister in August is now "all over with," but added that "[i]t wasn't alleged; there was an actual altercation."

Miller was arrested by the Chatham County Sheriff in North Carolina on August 7 for simple assault and false imprisonment after an incident during which he was said to have put his sister in a headlock and refused to let her leave a house party that both siblings were attending.

"I'll just say this: my sister was not in any state to drive, and I stopped her from driving," Miller told Ariel Helwani. "However, she was in a state to file a police report, which is now all over with. It's all finished. It was unfounded...a Miller family experience that got out of hand."


When pressed on whether it was truly necessary for the professional fighter to put his sister into a headlock to prevent her from driving, Miller insisted that it was.

"Look, my sister is a big girl," he said. "She's like 200 pounds and strong, muscle girl. I had to hold her, like, for real hold her. There's no wrist-controlling your big sister, you know what I'm saying? You've got to like, hold on to her."

Miller was arrested the day after the incident at the party, after his sister notified the Chatham County Sheriff's office. Originally, there was concern that the 30-year-old Miller, who will appear as a coach opposite British middleweight Michael Bisping on the upcoming season of the UFC reality show The Ultimate Fighter, might have his fighting career put on hold due to legal issues.

But there was nothing to the complaint, Miller said, and he expects no further legal action on the matter, though he is "glad I did that" in order to stop his sister from driving that night, he added.

"If I had to do it all over again, I would do exactly the same thing," Miller said.

What surprised him the most, Miller said, was how big the story became after TMZ initially reported his arrest.

"It's funny, because I'm in the stage of my career where people care about some petty redneck drama that I got into. It's really surreal. I had TMZ beating down my door and trying to call me about that. I was like, are you serious? I didn't even think that was a big deal."

Now that the matter has been settled, he can get back to focusing on the upcoming fight against his coaching counterpart on the TUF 14 Finale.

"All I'm thinking about is fighting Michael Bisping on December 3," he said. "...That's all I can think about."