Jon Fitch vs. Johny Hendricks Agreed to for UFC 141 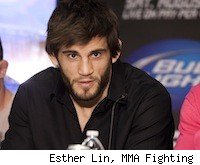 After trying unsuccessfuly to lobby for a fight against BJ Penn or Nick Diaz last week, Jon Fitch finally has his next date to enter the octagon.

The UFC welterweight contender will return to action for the first time since February when he takes on Johny Hendricks at UFC 141 on December 30.

The UFC confirmed to MMA Fighting that verbal agreements are in place for the bout, which was first reported by ESPN.

Fitch (23-3-1, 1 no contest) last fought Penn at UFC 127 and the two went to a three-round draw. Afterward, they were expected to face off in a UFC 132 rematch, but a shoulder injury derailed Fitch, and he's been rehabbing ever since.

The draw was the first time Fitch hadn't won since a UFC 87 championship fight loss to Georges St-Pierre. Since joining the UFC, Fitch is 13-1-1.

Hendricks (11-1) is coming off back-to-back wins over Mike Pierce and TJ Waldburger. He's won six of his seven UFC bouts.