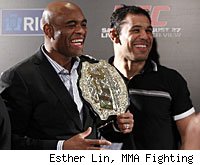 Silva injured his shoulder in training for his UFC 134 fight against Yushin Okami last month, which he won via second-round TKO. There was some fear within his camp that he would have to undergo surgery, but Soares said Silva will simply need rehab to heal it.

"A month before the fight I injured my shoulder while training with Junior dos Santos and I was feeling a lot of pain in Rio. I've had to take some medicine and warn the athletic commission about it," said Silva recently to Tatame. "I've talked to my doctors. I had an MRI and then I started feeling pains in my shoulder but the doctors let me go and said it was not that serious. It's a small injury, but I guess it's on the cuff and bothers me. I'll rest for a while and get healed."

Soares said he was hoping Silva would be ready to defend his middleweight title again in the first quarter of 2012.

No opponent has been set for Silva's return, but we may get some answers next month when Chael Sonnen meets Brian Stann at UFC 136 in Houston.