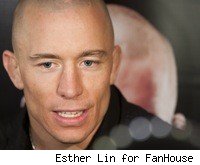 In a stunning development, Nick Diaz has effectively gone missing in action from the UFC, forcing company president Dana White to remove him from a UFC 137 welterweight championship match with Georges St-Pierre.

Diaz will be replaced by Carlos Condit, who was already scheduled to fight on the same night.

Diaz had been scheduled for press conferences Tuesday in Toronto and Wednesday in Las Vegas. White said that Diaz missed a series of flights for his Canada trip, and hasn't been heard from him since Monday night after the company tried to re-book him multiple times.

More: Cesar Gracie: 'I Can't Stick Up for Nick on This One'
"I'd had my reservations about Nick Diaz for a long time," White said during a press conference at the Mandalay Bay Events Center. "You've heard me use the term 'play the game.' All I asked him for was this much. When he signed, I said, 'Let me tell you what kid, add up all the purses of you career, this will be biggest fight of your life.' You have the opportunity to fight GSP and win the welterweight title. But I need you to do certain things."

Diaz has always been notoriously media averse, but White said in his history of promoting over 1,600 fights, he's never had this happen. St-Pierre, too, was in a state of shock over the situation.

"I just don't understand why someone doesn't show up to an opportunity like this," St. Pierre said. "I just can't believe it. It's amazing. It's crazy."

"He was going to make life-changing money for this fight," White added. "And maybe the thing is with Nick Diaz, maybe he did crack under the pressure. Maybe he folded under the spotlight."

White said he wasn't yet sure if he would release Diaz, but acknowledged it was a possibility.

The already shocking press conference turned even more bizarre midway through, when Diaz's manager Cesar Gracie called White as he was on the podium and apologized for Diaz's behavior, saying he has been unable to locate him.

At that, St-Pierre shook his hand.

"Maybe he is here and he is going to come out and say, 'This is a prank,'" St-Pierre said. "Are you trying to prank me?"

White later mentioned that Diaz had been staying with Gracie at his house and "snuck out the back door." Since then, he's essentially gone missing. White said even Nick's brother Nate Diaz could offer no leads on his whereabouts.

The St-Pierre vs. Diaz fight was essentially a title unification bout, with Diaz recently surrendering the Strikeforce belt despite being the reigning champion in order to re-sign with the UFC. Diaz had won 10 straight fights leading up to the GSP matchup, but St-Pierre said he believes Condit is a more dangerous opponent.

"I do believe Carlos Condit is more dangerous than Nick Diaz," he said. "If they fought, I would put my money on Carlos Condit, so for me it's a bigger challenge."

Condit and St-Pierre were both stablemates at Team Greg Jackson, but St-Pierre said he had no issues with facing Condit.

White said that when he called Condit and offered him the title fight, Condit broke down crying in appreciation of the opportunity. White added that Condit immediately got on a plane to head to Las Vegas and meet with the press.

Shortly after the announcement, Condit released a statement voicing his excitement for the match.

"I've been fighting for nearly a decade and there has been a lot of blood, sweat and tears that has gone into that," he said. "A lot of sacrifices have been made both personally and professionally, and I'm looking forward to showing the UFC that I am deserving of this opportunity."

Diaz is 27-5 overall with four straight wins and victories in 12 of his last 13 bouts. St-Pierre (22-2) has held the UFC championship since recapturing the belt in August 2007, winning nine straight fights.

White said the change comes as a "pretty big financial blow" to the UFC, saying the promotion spent over $15,000 just in flights over the last two days. He also said completed advertising would have to be changed, and that tickets went on sale today for the October 29 event. Fans who purchased tickets expecting to see St-Pierre vs. Diaz will have the opportunity to receive a refund, though White said he wasn't expecting many to make those requests.

White said he was not yet sure of plans for Condit's originally scheduled opponent, BJ Penn.