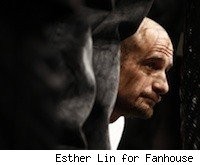 One of the interesting subplots of the Georges St-Pierre vs. Carlos Condit UFC 137 main event is the fact that both fighters currently train under Greg Jackson.

MMAFighting.com spoke to Jackson shortly after the UFC announced the welterweight title fight on Wednesday to find out where his allegiances will lie come Oct. 29.

A transcript of our conversation can be found below.

Ariel Helwani: Greg, two of your star fighters are going to fight each other in October. What will do you?
Greg Jackson: Teammate protocols are pretty clear in this situation so everybody knows what happening. I step out, the other coaches -- John [Danaher], Phil [Nurse] and Firas [Zahabi] -- will take care of GSP and probably [Mike] Winkeljohn and some of the other guys here will take care of Carlos. But I step out of it, so I won't be cornering either guy. They'll fight each other. Those are the new teammate protocols. We knew this would be coming -- it will probably be coming again --but this time we are very well prepared.

Carlos trains in Albuquerque full-time, while GSP's home base is in Montreal, so how will you not offer advice when you see him in the gym?
Carlos is still training with a team. I am just not going to do game plans and private lessons and everything that I normally do for the guys because usually it's a pretty intense process -- I give them private lessons all the time -- heavy on the game planning, heavy on the personal growth plan, and for this, I'll just let the other coaches do that for both Georges and Carlos. So I'll just step out. They're all amazing coaches. Geez, I'm the worst coach on the team. They'll all do their thing.

Are you disappointed that they have to fight each other?
Nah, I mean, I don't like it. They are two of my friends. Me and Georges, I mean, I love that man to death. And Carlos has been, since he came back to the gym, has been on a destruction streak. So they both have to eat, they have to make money. I really love training, working with my guys. There's two of my favorites that I don't get to work with this time, so that's kind of a bummer. But I don't care about the money; I don't care about the fame; I don't care about any of that stuff. They've got to make a living, but I can't look across the cage at one of my guys. I just can't do it.

Will GSP come to New Mexico for this camp?
No, I don't think so. That wouldn't make much sense if Carlos was here. The team is such a well-oiled machine after so many years of being together it's not going to be a big deal.

Have they ever trained together?
Not much. I don't know if they have at all, so not much. Carlos only came back a little bit ago and Georges comes in and out, and I go up there [to Montreal]. So I don't think they have trained together at all.

I'm guessing you won't offer a prediction on the fight?
Absolutely not (laughs). Since they're both members of our team, I predict somebody from our team is going to win.

Where will you watch the fight?
I'll be there because Donald Cerrone is fighting that night, Eliot Marshall ... I got, like, four other guys. I'll be there, but hopefully I'll duck out before the main event. It's just not something I want to watch. That's their business. Sometimes brothers got to fight and it will be what it is and everything will be good again. They're both really stellar, standup guys. You know, Georges, I cannot say enough good things about him. Not only Georges St-Pierre the fighter but Georges St-Pierre as a person. That man is phenomenal and the same for Carlos Condit. Such a good guy with a good heart. They're going to have a great dust up, I hope they get Fight of the Night and then they can feed their families.