Cesar Gracie: 'I Can't Stick Up for Nick on This One' 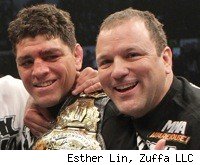 Cesar Gracie, Nick Diaz's long-time manager and trainer, says he has stood behind Nick Diaz for years, but he can't defend his decision to not show up to the UFC 137 media days in Toronto and Las Vegas this week.

Instead, Gracie told MMAFighting.com that he stands behind the UFC's decision to remove Diaz from the UFC 137 main event against Georges St-Pierre in favor of Carlos Condit.

"I told Dana [White] he was right to have done that," Gracie said.

In fact, Gracie called White in the middle of the UFC's press conference to announce the main event switch to say as much.

"There's a lot of hard workers I see that have trouble putting food on the table for their kids," Gracie said. "I've stuck up for Nick a lot, but I can't stick up for him on this one."

More: Nick Diaz No-Shows UFC 137 Presser, GSP Now to Face Carlos Condit
Gracie said he last spoke to Diaz on Tuesday. That's when Diaz informed him that he couldn't find his passport and was not going to be able to fly to Toronto for that day's media obligations. The UFC excused Diaz for missing the Toronto leg of the trip, as long as he made it to Las Vegas.

"I would have driven him to Vegas if it came to that," Gracie said. "I don't care. He just turned his phone off and acted like a little kid. It just doesn't cut it."

In talking to Gracie, it's clear he's more disappointed than anything in Diaz's behavior considering how big this fight against St-Pierre was for him.

"Nick is like family to me. We're going to have a long discussion, hopefully with Dana, to see if he's still in the UFC or not. But let's face it, Nick is 28 years old. I talked to Dana about this before, and I think a big problem with all of this is Nick has social anxiety. He doesn't like to go and be away from home. He has no trouble fighting in the cage, though," Gracie said.

"You can't just not show up and [not] tell anyone anything."

At Wednesday's press conference, White suggested the pressure of fighting GSP got to Diaz, but Gracie quickly refuted that notion.

"He doesn't feel comfortable being around people," he said. "He has a very deep ingrained social anxiety, and it's something he probably needs help for, I think. I think that's why he self-medicates himself with the marijuana. That's my amateur opinion.

"He did the same crap with Paul Daley and a couple other guys. It was the same Nick Diaz. It's not the pressure of fighting GSP. It's the pressure of doing a news conference before the fight. Fighting is no pressure because he gets to beat someone up or get beat up."

Gracie isn't ready to severe ties with Diaz, though. Not when he needs him most. But he did offer his pupil a bit of advice through the media because that's the only way he can reach him right now.

"I've always been there to facilitate things for him and stuck up for him even when he was wrong. If I were him, I would be calling Dana at some point basically begging for my job and giving [me] another chance to fight for the title."