Despite Death Threats Against Him, Chael Sonnen Admires Brazilian Fans 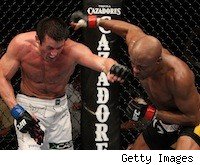 In the end, it wasn't the threats of death that dissuaded Chael Sonnen from traveling to Rio to support his training partner Yushin Okami at UFC 134; it was the almighty dollar.

Appearing on Tuesday's edition of The MMA Hour, Sonnen said he wanted to attend the UFC's landmark return to Brazil, but as angry voices sounded off on the possibility and tensions grew, he quickly came to realize he would be a distraction to Okami. It also became obvious to everyone else, until an Okami sponsor requested that Sonnen stay home.

Sonnen said that he was a little bit surprised at all the reaction he was receiving since he was not even on the card. He claimed that one of Brazil's national newspapers featured him on its front page. In some ways, he became a de facto public enemy No. 1, and worries began to grow that their could be a real incident if he attended the event.

Knowing it was Okami's night, Sonnen chose to stay home and watch the fight from his home in Oregon.

"It wasn't my show, I wasn't part of it," he said. "It wasn't my night. I didn't want to take attention off Yushin. I truly believed he would win the championship and the last thing I wanted to do was take away from that."

Despite the hostile crowd reaction to him, Sonnen said he admired the intensity and passion of the Brazilian fans, and event went so far as to suggest that American fans can learn from them.

"I like it," he said. "I think Brazil does it right. They support their fellow countrymen. In North American, we don't support our countrymen. I have people that are American that want to see me lose to Anderson [Silva], and that's OK, but it's a little bit odd. In no other country would you turn on your own countryman.

"I'll give you a good example," Sonnen continued. "Matt Hughes fought Royce Gracie. That fight took place in Los Angeles and they booed Matt Hughes so loud, and they cheered Royce with all of their might. In no other country would you cheer against your fellow man except North America. I love the American crowd, but it does confuse me. And so I really admire the Brazilians for backing their own."

Despite his past troubles with Brazilian fans, Sonnen says he would have no problem traveling to Brazil in the future to compete there. Particularly given the possibility for a soccer stadium show in 2012, Sonnen said he would love the opportunity to take part in a major show like that and "have a little ownership" in breaking into a major market.

"I'm definitely willing to go there," he said. "There would be some security concerns but those guys and their blow darts don't scare me."

Sonnen may yet get that chance. On October 8, he faces Brian Stann in a fight that is likely to lead to a championship opportunity for the winner. Sonnen says he's objectively come to the conclusion that he won't be as good as he was when he left. But, he adds, "I'm still the best."

As for how American fans will respond to Sonnen against the popular Stann, he says the fans can cheer for both, but he'll perform no matter what the reaction.

"I'm not asking for the crowd's approval," he said. "They can boo at the top of their lungs. I'm fine with that ... I do like the passion Brazil brings against me because it shows support for their fellow fighter. That is what they should do. It's a fight, country vs. country, man vs. man. If you're going to cheer for somebody, cheer for your guy. But if a fan buys a ticket, he can do whatever he wants. It doesn't bother me."