Josh Barnett: Antonio Silva's Size Only Thing Allowing Him to Be 'Decent Fighter' 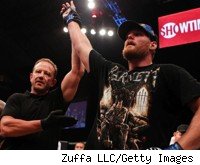 Fight fans weren't the only ones sorry to see Alistair Overeem pulled from the Strikeforce heavyweight Grand Prix in the midst of a contract dispute with Zuffa. Fellow tournament participant Josh Barnett said on this week's edition of The MMA Hour that the Grand Prix had undoubtedly lost something in his eyes now that Overeem is gone from the field.

"I can't speak for anybody else, but I know that I wanted to face him in the finals," Barnett told Ariel Helwani on Thursday's edition of the show.

According to Barnett, who is slated to take on Sergei Kharitonov in the Grand Prix semifinals on September 10, the fact that Overeem could be dropped from the tournament and released from his contract so suddenly got his attention for more than just competitive reasons.


"From a fighter perspective, it stinks," he said. "You'd like to have the opportunity to fight the guy, plus he was the champ. Seeing the champion just get let go is kind of a jarring reminder, I guess, that you're not really all that important."

Barnett, who said that "nothing really surprises me" in MMA these days, had his own issues with the new Zuffa ownership when he requested permission to participate in a pro wrestling event in Japan, which his Strikeforce contract allows for, he said. Zuffa turned down the request, citing the proximity to the tournament semifinal match, which didn't please his employers in Japan, Barnett said.

"They were upset. It was pretty much the biggest show of the year for them, and I was their main event."

Still, Barnett has a full dance card back in the states, with the tournament nearing its conclusion and questions swirling about what Zuffa will decide to do with the winner. Barnett has to get by Kharitonov on Saturday, but he'll also be keeping a close eye on the other semifinal match between alternate replacement Daniel Cormier and Antonio "Bigfoot" Silva.

Barnett said he was picking Cormier to win that fight despite Silva's considerable size advantage.

Silva suffers from acromegaly, which causes the enlargement of certain physical features, but which also might be his saving grace as a fighter, according to Barnett.

"You could almost say that I'm sure he's had his issues growing up with a thing like gigantism, and all the difficulty that's come from that. But gigantism is what actually allows him to be a decent fighter, because he doesn't do anything particularly awesome, but he's just massive," said Barnett. "But all of his fights come down to him getting the takedown. Those are the ones he wins, and against Cormier I don't think that's going to happen."

Barnett added that, ideally, he'd like to face Cormier in the tournament finals, if only to find out whether he's capable of taking down the former U.S. Olympic wrestling team captain.

As for whether he'll once again put his pro wrestling expertise on display at the open workouts, Barnett wasn't ruling anything out, saying, "Who knows? I hate to disappoint."

And though he said he caught some heat from some fans for seizing the microphone from Gus Johnson after defeating Brett Rogers in the Grand Prix quarterfinals, don't expect Barnett to play along with the typical post-fight Q&A anytime soon.

"The interview moments to me, they're stupid," he said. "They're a waste of time. Just give the guy the mic, let him say what he's got to say, get him out of there, and let's move on. But let's keep it fresh, keep it original, keep things going instead of [saying], 'Talk us through the end of this fight.' Nobody gives a s--t. If you want to see the end of the fight, go hit rewind on your DVR. There's about 18,000 slo-mos after you've won, so why don't we get something more personal, more individual about the guy."

For now, Barnett just has to make sure he's on the right side of those slow-motion replays. Against a slugger like Kharitonov, even an experienced fighter could very easily end up as a highlight-reel victim if he isn't careful.