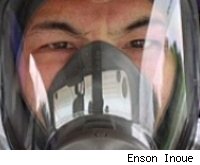 Since the devastating March 11 earthquake and tsunami, former Shooto heavyweight champion and Pride veteran Enson Inoue has been tireless in his charity efforts, repeatedly traveling to northeast Japan to directly help those in need.

Inoue's work has helped countless people and brought much needed light to the situation in Fukushima and the areas affected by the disasters. This work has been costly though, Inoue sacrificing a gym, his pets and spending an incredible amount of money and time in the process.

On his last trip, Enson Inoue possibly made the greatest sacrifice of all - he risked his life by traveling to one of the most dangerous places on earth.

Speaking exclusively with MMA Fighting, Enson Inoue describes his journey directly into the highly radioactive Fukushima evacuation zone and his covert visit to the the heavily damaged Fukushima power plants.

MMA Fighting: How many times have you been to the Tohoku region now?

How have you seen things progress since you've been up working up there? What is happening with the people in the evacuation centers?

The last time I went to Fukushima prefecture and everyone was starting to move into the temporary housing. They are given these temporary houses and allowed to stay there for up to two years. They are free but the problem is that the moment they leave the evacuation centers, they are being cut off from most of the aid. A lot of people need support though so basically, they don't want to leave.

The evacuation centers are short staffed though and they need to get the people out of there so they are doing things to make it less comfortable - turning the lights out super early for example. That caused a lot of big fights of course, so now people are just leaving.

Are evacuees given assistance in moving or setting up their new homes?

In Fukushima, they are given 30,000 yen (approximately $390 US) by the government or TEPCO, they are basically the same thing, for bills – water, electricity or whatever and they are also given five items: a refrigerator, washing machine, TV, rice cooker and a microwave. In other places, like Iwate, they are just given a 10-pound bag of rice.

Most of these people lost their cars and businesses or jobs so it's really hard for them to get back on their feet. What I'm doing now is going to the people in these temporary houses and giving them things they need to get set up. Soap, you know, basic things you need to buy when you move into a house.

They are actually pretty nice, I guess. They are adequate, but they are temporary. A lot of people in these temporary houses will never be able to return to their real homes because of the radiation. They are talking about not being able to live in some places in Fukushima for at least a century.

What I've heard lately is that some of the older people are committing suicide. They think that even if they have these places to live for two years, they can't pay the bills. They can't support themselves now. They are too old to get jobs and so they just commit suicide. There's a lot of suicides.

What do they need? How do you think they can be helped?

The last time I was there, the people were really cold. I don't know why. I guess I haven't met a lot of these people before so they are wary of me. I try to help them but they just say they are OK. You know they aren't OK. They are hurting. They lost everything. I think it'll just be a matter of time until they are comfortable with me, until I get to know them. 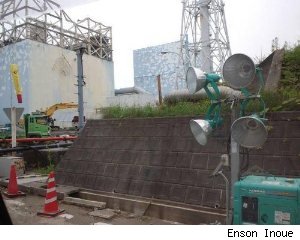 The last time I was up in Fukushima I met one of my friends for drinks. He's a contractor who works inside the evacuation zone. We were sitting at a bar and he told me, "Enson, if you want to go in, this is the time."

He said, "The security. All the security is really going down. We can get you in easy."

I was with another friend so I asked if he could get him in too. He said OK, but because he isn't Japanese, he has to hide under blankets.

Why did you want to go in there though? It's one of the most dangerous places on earth right now.

She never could understand that. I just told her to drop the conversation. I told her, 'One – You're in Hawaii and you're not here. Two – you don't consider Japan your home.' So I told her, 'You are not here in my shoes. The bottom line is you're there, I'm here. We are coming from completely different places.' She never completely understood that.

What did you want to do inside evacuation zone though? Was it just curiosity?

I wanted to go in for two reasons.

One was to feed the animals, and I also wanted to see what the radiation was really like and see how far I could get towards the plant. It was out of curiosity but also to let people know what I found there. I had bought two radiation meters, they were both geiger counters and dosimeters, and I wanted to put one inside of my suit and one outside of my suit.

What kind of suit?

Those white radiation suits you see on TV. They are thin, almost like paper. The contractors have a whole bunch of them. Masks and everything. We were completely sealed off. They have to burn them after every time they go in so they had a bunch of them.

So what did you find out?

Well those suits aren't working. They do nothing. If the meter on the outside of my suit was reading 19 micro seiverts or whatever, the one on the inside was reading around 17. The suits don't do jack s***. They aren't protecting those workers. I don't understand how those people are allowed to go in. They have a false sense of security.

Did you tell the contractors about this?

Yeah I showed my friend the meters, and he kind of freaked out, and said it was his last week working there. You don't feel anything, you get a real false sense of security. We weren't really supposed to be there though so we didn't talk to anybody else.

Once you were in there though, you went right up to the power plant?

Yeah, we just kept driving further and further in and there was no security or anything. We got to the plant and there was a checkpoint, but we just kind of waved our way through with these fake IDs and my other friend hid under some blankets.

What did you do in there?

We got out to take a few pictures, or whatever, but then our driver got really freaked out. We were right there, you know? We were standing right next to one of these reactors and it was completely blown up (pictured above). Our driver jammed the car into reverse and raced out of there so we had to go too. We were never checked or monitored or anything.

What did you feel in there? No fear at any point?

It's hard to fear radiation because you can't feel anything. I was talking to a former marine nuclear expert and he told me everything I needed to know. I was watching the meters, and I knew what levels were safe. I felt educated so I felt safe. It is kind of scary in a way though. It's so bad for you, but you can't feel a thing.

Do the contractors hired to work in there have the same amount of information as you?

No, they don't know anything. They take off their masks all the time, and they don't have meters or anything. All the workers are like that. When they first started going in they were freaking out over every little thing, but as time goes by, because you don't feel it or see it, you get careless.

You know what was crazy though? There is no one checking you as you leave either. We could have gone to a restaurant or something before cleaning and radiated all those other people. No one is really checking that. I was thinking about going to the doctor actually, just to check.

What was the rest of Fukushima evacuation zone like?

Like a ghost town. Convenience stores cleaned out, no one around. The animals that are still alive are walking all through the towns. There are some real hot spots of radiation in there but some places, I guess because of the mountains and valleys or something, have almost nothing. I don't understand why the people who live there can't be allowed to go in and retrieve their things. They aren't allowed to make that choice.

What do you learn from an experience like this?

Before I went to jail, the circle of things that annoyed me was pretty big. (Note: Inoue was jailed in 2008 for possession of marijuana. Inoue spent 30 days in prison and is currently serving a three-year probation.)

You know, sitting in traffic used to p*** me off, having to do chores or whatever, people that get to you. That circle was pretty big in my life. Your every day things like eating breakfast, going for a run, showering – they were in the circle of things I didn't care about. Going out and meeting friends, eating a really good meal – they were the things that I enjoyed.

When you go to jail though, your values change. Having miso soup for breakfast is all of a sudden something you really enjoy. You look forward to taking a shower. You become much more patient so traffic doesn't p*** you off. The circle of things that annoyed me shrank and the circle of things that I enjoyed grew. It really made me a lot happier and a more relaxed person.

After jail, I did the pilgrimage and that helped me enjoy and appreciate things more. (Note: after his release from prison, Inoue completed a 30-day 750-mile pilgrimage on foot, visiting 108 temples in Shikoku.)

Just getting a bottle of water from someone was amazing! When I was in jail I knew what it was like to have nothing and on the pilgrimage I had nothing there too. Before I would say thank you and forget about it. But now, I'm so appreciative! I still haven't forgotten the people that helped me!

Appreciation is what drives me to go up north. I can understand what they are going through, to some extent. I can't compare going to jail to what the tsunami victims and people from Fukushima are going through, but I know what it's like to have everything taken away from you. I know how good the small things can feel.

Going into the Fukushima power plant is part of me appreciating my freedom. Yeah it's dangerous, but when I was in jail, I had no opportunities to make any choices - even dangerous ones. They told me when and how to do everything. Enjoying my freedom and making the most of all the opportunities I get in my life - doing the pilgrimage, going into Fukushima, spending all my time helping the people up north - it allows me to shrink that circle of annoyance even more. It makes me a more appreciative and happy person.