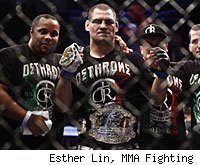 UFC President Dana White announced on Friday that Velasquez vs. dos Santos will be the main event for the first UFC on Fox event, on November 12 in Anaheim, California.

"We deliver -- we deliver to the fans and we deliver to the partners and in my opinion we're delivering again," White said. "We're going with the most prestigious championship in all of sports -- the heavyweight title."

Velasquez vs. dos Santos had previously been scheduled to take place on November 19, as the main event of the UFC 139 pay-per-view event in San Jose. But the UFC wanted to hit a home run with its first Fox fight, and so it decided to take the heavyweight title bout off pay-per-view and onto network television.

"This is like us getting Ali-Foreman," Fox Sports Chief Executive David Hill said.

So the Velasquez-dos Santos bout won't just be the first UFC main event on network television, it will also be one of the best fights that MMA fans have ever been able to watch without having to buy a pay-per-view. This is a huge development for the sport, and White said it will be the most-watched fight in MMA history.

Velasquez vs. dos Santos is a five-round title fight and will be the only bout televised live during the hourlong Fox show. It's possible that some of the undercard fights could still be shown on tape delay, but White said he isn't sure yet how the UFC will air the undercard fights on the November 12 event.

"We'll figure that out -- we haven't figured that out yet," White said. "We always get the fights to the fans one way or another so we'll figure this out, too."

Velasquez has been sidelined with a shoulder injury since winning the heavyweight title from Brock Lesnar in October, but he has said recently that he's 100 percent healthy and ready to defend his title. He'll get a very tough test from dos Santos, who is undefeated in the UFC and one of the best strikers in the sport.

White said both Velasquez and dos Santos are thrilled at the opportunity to have their fight taken off pay-per-view and put in front of a larger audience on network TV.

"It was the easiest conversation I've ever had," White said. "It took literally three and a half minutes to get both deals done. They couldn't be more excited."