UFC's Choice for First FOX Fight a Bold Move, but Not Without Risks 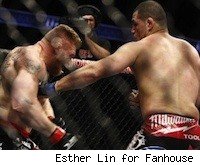 UFC president Dana White said on Friday that he was "literally betting everything" that Cain Velasquez and Junior dos Santos will deliver a quality fight for the UFC's first event on the FOX network this November.

While this statement makes White just one more pro sports figure to misuse the word 'literally' (just saying, even if the fight's a dud, White won't wake up penniless in a vacant lot the next morning) he does still have a point.

The UFC is taking a major gamble putting this (and only this) fight on its first network show. But then, what did you expect? When you're on the big stage, you might as well give it your best. In the UFC's case, that's a heavyweight title fight, the gravity of which any sports fan can immediately comprehend. Especially for those who only understand combat sports through the lens of boxing, the heavyweight strap is the grandaddy of them all, the biggest title in the world.

Now it's coming to network TV in one dramatic roll of the dice. It's a shrewd choice by the UFC for several reasons, even if it's no sure thing.

Choosing how best to showcase the UFC to new viewers in a free, hour-long event on FOX must have been its own special challenge. On one hand, you want to give them something that feels appropriately important. As Bull Durham's "Nuke" LaLoosh would say, you want to announce your presence with authority.

A title fight fits that bill nicely. Then again, a title fight also has the potential to go five full rounds, leaving very little room for anything else in a 60-minute network TV broadcast, once pre-fight packages, introductions, and commercials are factored in.

But come on, these are heavyweights we're talking about. Not since Tim Sylvia dropped the belt via decision to Randy Couture in 2007 has a UFC heavyweight title fight gone the distance. Between Velasquez and dos Santos, it sure seems like somebody is liable to end the night face down on the mat before the judges have their say.

Of course, the promise of heavyweight power is both an asset and a liability in this case.

Say you spend weeks pumping up this fight on football and baseball broadcasts. Say you successfully suck in millions of casual sports fans who have never really sat down to watch an MMA fight before, let alone a huge UFC title fight. Say you beat those people over the head with how important and monumental this whole deal is, and say they buy into the hype. Then what happens if it's over in 90 seconds?

On Friday's media call FOX executives admitted they hadn't yet decided what to do with any extra time. Maybe they'd show a fight from earlier in the night, they said, or maybe they'd run a highlight package.

There's also the chance that they could run into the opposite scenario. Velasquez, being a wrestler, could always decide to play it safe and grind out JDS on the mat rather than stand up and play Russian roulette with the Brazilian striker. For his part, dos Santos has a bit of a reputation for stunning opponents early and then coasting in the later rounds.

Now matter how much "education" you do on FOX before the fight, network TV viewers might easily be underwhelmed by either scenario in their first exposure to MMA.

But then, such is the risk you take with any fight. There are no guarantees in MMA. How many times have we seen big fights turn out to be snoozers while lackluster pay-per-views become the fight card of the year?

Any fight the UFC could have offered up here would involve some potential downside. With a heavyweight title fight, at least White and company are signaling their willingness to put some of their best material on free TV. At least they aren't saving it for pay-per-view, hoping the network audience will be content with action more suited to a Spike TV Fight Night event.

Instead, the UFC is kicking in America's door with its first fight on network TV. It's putting everything on the table and relying on the fighters to bring it home. And really, what else can you ask for? Promotion and pre-fight build-up is a big part of this business, but eventually it always comes down to what happens when the cage door closes and the hype-men take their seats on the outside. Eventually, it's always about the fighters.

If you're going to put your faith in anyone, you might as well put it in two evenly matched big men fighting for a title every sports fan understands. You might as well put the best you've got into the national spotlight, now that you've finally got it all to yourself for one precious hour.

Whether it lives up to the expectations or not, at least you won't have to sit around years from now, wondering if you should have gone bigger when you had the chance.