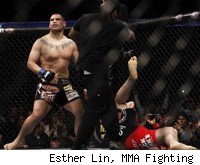 The UFC on FOX 1 fight card will be headlined by Cain Velasquez vs. Junior Dos Santos on Nov. 12 at the Honda Center in Anaheim, Calif.

The heavyweight title fight was actually slated for the Nov. 19 UFC 139 event in San Jose, but with an opening for UFC's first live fight on national television, champion Velasquez and challenger Dos Santos were quick to accept fighting a week earlier than planned. This fight will be the only live fight on the one-hour broadcast, but an entire card will be filled out for the live audience in attendance.