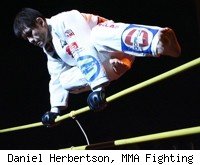 Both fighters are making rare in-ring appearances for this "Grabaka Live! First Cage Attack" event in association with DEEP. Kikuta, who will turn 40 in just over a week, has fought less frequently, having only accepted four fights in the past five years. Meanwhile, Yamamoto, 35, will be fighting for the first time in five years.

Kikuta (29-7-3), who began MMA in March 1996 and was a competitor on the second PRIDE card, is recognized as one of the sport's pioneers. In 2000, he founded the GRABAKA gym best known for developing future PRIDE stars Akihiro Gono and Kazuo Misaki. The former Pancrase and ADCC champion Kikuta made a stop last October on the star-studded DEEP 50 anniversary event, beating Lee Sak Kim by TKO.

Yamamato (5-9-1) has been far less successful in MMA, but can say he once challenged for the UFC middleweight title. Back in UFC 23 in November 1999, Yamamoto beat Daiju Takase and Katsuhisa Fujii in a single-night tournament to earn a title shot. However, Yamamto would fall short at UFC 29 via guillotine choke to Pat Miletich.