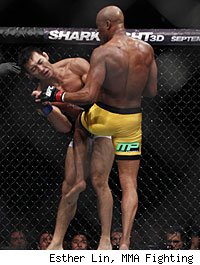 Saying that Anderson Silva the best fighter in MMA is an accurate statement, but it's also an understatement. Just calling Silva the best doesn't really capture just how big a gap there is between Silva and the rest of the sport right now.

Since signing with the UFC in 2006, Silva is 14-0, which is the best record anyone has ever had in the UFC. But it's not just the fact that he keeps winning, it's the way he wins. Twelve of Silva's 14 victories are by stoppage, and he has a wide variety of ways he can stop his opponents: He knocked out Chris Leben and Rich Franklin with knees, James Irvin and Forrest Griffin with punches, and Vitor Belfort with a front kick. He TKO'd Yushin Okami and Nate Marquardt with punches, and Franklin with knees in a rematch. (He also TKO'd Patrick Cote, although you can't give Silva a whole lot of credit for the way Cote's knee buckled underneath him.) Silva made Chael Sonnen tap out to a triangle armbar, made Dan Henderson tap out to a rear-naked choke and made Travis Lutter tap out by holding him in a triangle and elbowing him in the head.

Winning percentage and stoppages aren't the only way to measure a fighter, but a fighter's record gives you a pretty good idea how good he is, and how often he finishes his opponent gives you a pretty good idea how dominant he is. And there's really no one on Silva's level when it comes to fighting at a high level, consistently winning and stopping his opponents with great frequency.

We'll compare Silva to the rest of the best fighters in MMA below.

Top 10 Pound-for-Pound Fighters in MMA
(Number in parentheses is the fighter's rank in the last pound-for-pound list.)

1. Anderson Silva (1): Silva is the all-time UFC record holder for consecutive wins and wins in title fights, and he's twice moved up in weight class and destroyed the two opponents he met at 205 pounds. The only real question is whether the UFC can keep finding good opponents for him; other than a Sonnen rematch there's not a lot for Silva to do at middleweight.

2. Georges St. Pierre (2): In the same time that Silva has gone 14-0, St. Pierre has gone 10-1, with three wins by TKO, one by submission and six by decision. The methodical way St. Pierre controls fights by insisting on doing what he does best and never allowing his opponents to do what they do best is impressive, but it's not as impressive as the way Silva crushes people. And, of course, GSP lacks Silva's undefeated record inside the Octagon.

3. Jon Jones (3): Jones' record looks a lot like Silva's: He's 13-1, with eight wins by knockout or TKO, three by submission and two by decision. And Jones could easily be 14-0 with one more stoppage; his disqualification loss to Matt Hamill is really more like a TKO win for the purposes of considering how good Jones is. The difference between Jones and Silva is that Jones has only been fighting professionally for three and a half years, has only been in the UFC for eight fights and only started fighting the best of the best this year. Jones is the active fighter whose accomplishments may look the most like Silva's one day, but Jones isn't there yet.

4. Jose Aldo (4): In the same time that Silva has gone 14-0, Aldo is 11-0, with seven wins by knockout or TKO and four wins by decision. Aldo is somewhat similar to Silva as a striker in the diverse way he can finish fights with his hands, feet, knees and elbows. But he's not quite as consistent as Silva, and unlike Silva he hasn't yet proven that he can finish fights with his submission game.

5. Dominick Cruz (5): In the same time that Silva has gone 14-0, Cruz is 12-1, with one win by knockout, one win by TKO on a doctor stoppage, one win by submission and nine wins by decision. Cruz's stand-up style is very effective in its own way but a lot different from -- and nowhere near as destructive as -- Silva's style. Cruz is the master of point-fighting, and that's respectable, but if he ever wants to be considered one of the truly great fighters he's going to need to finish more fights.

7. Gray Maynard (7): In the same time that Silva has gone 14-0, Maynard is 8-0-1, with one win by knockout and seven by decision. Maynard also had two wins, a loss and a no contest in his Ultimate Fighter days. Maynard was something of an anti-Silva during his eight-fight winning streak prior to fighting Edgar, as he'd consistently win but rarely dominate and often bore. His fight with Edgar, however, was sensational, and if he can win the rematch, he'll eliminate any doubt about what a great fighter he is.

8. Cain Velasquez (8): Velasquez is 9-0, including eight wins by knockout or TKO and one by decision. Velasquez has only seven UFC fights, so he has a long way to go before he has achieved as much as Silva, but his run of dominance to begin his career has been impressive. The big question is whether he can keep it up as he recovers from a serious shoulder injury, starting with Junior dos Santos in November.

9. Shogun Rua (10): Shogun's pounding of Forrest Griffin moves him up a spot in the pound-for-pound rankings. The Rua of the Pride days was a lot like Silva: In the three and a half years he fought in Pride, Shogun went 12-1, with nine wins by knockout or TKO, one win by submission and one win by decision. But he's not quite that fighter anymore; in the same time that Silva has gone 14-0, Rua is 8-3. Rua is still a great fighter who I'd pick to beat anyone at 205 pounds not named Jon Jones, but knee injuries have robbed him of some of his explosiveness.

10. Junior dos Santos (9): Dos Santos is 13-1, with eight wins by knockout or TKO, three by submission and two by decision. Unlike Silva, dos Santos's decision victories have been thoroughly impressive, and he has shown knockout power like few fighters in MMA have. If he passes his toughest test yet when he faces Velasquez, dos Santos will have a good case that he belongs near the top of the pound-for-pound list.