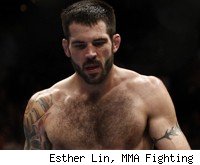 Welterweight Matt Brown has agreed to face John Hathaway at UFC 138 after the Brit's original opponent, Pascal Krauss, recently pulled out of the fight due to a shoulder injury, MMA Fighting confirmed with sources close to the event.

Hathaway (15-1) defeated Kris McCray at UFC Fight Night 24 in March to get back on track after suffering the first loss of his career against Mike Pyle at UFC 120 last October.

Brown (12-10) recently snapped a three-fight losing streak when he defeated John Howard at UFC Live on Versus 4. The former TUF cast member is 5-4 in the UFC.

Also scheduled for the UFC's return to England is Brad Pickett vs. Renan Barao and Thiago Alves vs. newcomer Papy Abedi.