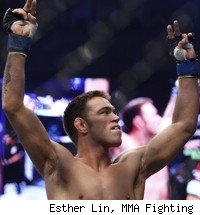 Jake Shields has decided to go through with his Sept. 17 fight against Jake Ellenberger at UFC Fight Night 25 following the recent death of his father and manager, Jack Shields. MMA Fighting confirmed the fighter's decision with UFC officials.

GracieFighter.com broke the news of Jack Shields' passing on Tuesday. He was 67 years old.

No word just yet on the cause of death. According to Sherdog.com, Shields died in his sleep on Monday at his Sacramento, Calif., home.

"Lost my father manager and one of my best friends today!! R.I.P jack you will be greatly missed and loved by many," Shields was quoted as saying on the Web site.

Shields served as his son's manager since 2002. Prior to his son's title fight against Georges St-Pierre at UFC 129, Shields spoke to MMA Fighting's Ben Fowlkes about how he ended up working with his son.

"After the ['Mach'] Sakurai fight he didn't get any offers. He upset Sakurai and then two months later he still wasn't in any fights. So he asked me to find him a fight," he said.

"Jake asked me to manage him after that and I said, 'I'm sure there's someone down there who knows the business a lot better than I do. I'm all the way up here in the mountains. There's got to be someone closer to you who knows this business.' Six to eight months later he sent me a contract that somebody wanted him to sign and then I took over. It was terrible. I had to [delete] the whole thing and write a new one."

UFN 25: "Battle at the Bayou" airs live on Spike TV from the Ernest N. Morial Convention Center in New Orleans. Shields vs. Ellenberger will serve as the card's main event.