Victor Cui: ONE FC Will Be King of MMA in Asia 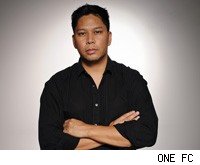 Since Pride shut its doors in 2007, the MMA world has been dominated by American promotions. With leading Japanese promotion DREAM struggling to stay afloat, the focus of the MMA world has shifted to the West and Asia, the world's most populated continent and the birthplace of martial arts.

After spending the last 15 years organizing events such as the X-Games, the Olympics, PGA Tour and World Cup Indoor Soccer, Cui now shifts his focus to MMA and with ONE FC aims to create,"the king of MMA in Asia."

With the PGA Tour, Canadian Golf Open, LPGA Canadian Women's Open, 2000 Olympics and the X-Games on his lengthy resume, Victor Cui is no newcomer to promotion - and that resume includes MMA.

While working at ESPN Star Sports in 2010, Cui put together the Martial Combat series to gauge interest for MMA in Asia. Although Martial Combat pilot was much smaller in scale than the forthcoming ONE FC, it was still ambitious as Cui promoted 12 events in six months with two shows on consecutive nights every month.

Promoting Martial Combat proved to be a valuable experience as the pilot promotion allowed the ONE FC staff to become acquainted with the MMA business in a very short time. The incredible schedule ensured that a tight ship was being run and it also enabled Cui to convince "some high-powered friends with deep pockets" to support ONE FC.

"The small test pilot project (Martial Combat) that I did while working for ESPN StarSports last year, it was exactly that - a small test pilot project to test the waters and to gauge interest levels for MMA in Asia," says Cui. "It was a small experiment held in a hotel ballroom whereas ONE Fighting Championship is the real deal. ONE Fighting Championship is the Asian major leagues."

The first ONE FC event is set to take place at the 12,000-seat Singapore Indoor Stadium on Sept. 3. Cageside and VIP tickets sold out in hours and demand was so high that the ticketing service server reportedly crashed. The event will be broadcast on network TV in Singapore, shown in 500 million homes in Asia on ESPN StarSports and will be streamed free online to the rest of the world.

An MMA event of this scale has never been held in Singapore before, but a look through the inaugural card for such a highly hyped event is somewhat confusing as only a handful of fighters on the card have any significant MMA experience. Names such as Yodsanan Sityodtong, Vuyisile Colossa and Ma Xing Yu are unknown to many Western fans, but that is not the case for Asian audiences.

"Fans want to see the best of the best compete against one another. For that very reason, ONE Fighting Championship has signed practically every Asian world champion or national champion in martial arts to compete under MMA rules. Most of our fighters are already household names in Asia."

As Cui implies, a significant number of these household names and champions are not actually famous due to their MMA accomplishments. Many draw from the locally established sports of Muay Thai, karate, boxing, sanda and wushu or are from Brazilian jiu-jitsu. In many ways it feels like a throwback to the early 90's era of style versus style. But getting these big names from other combat sports is part of the plan to appeal to mainstream fans in developing markets.

"Take a guy like Yodsanan Sityodtong," says Cui. "WBA boxing world champion with a 58-3 record with 48 KOs...he's a national hero in Thailand...he's been a national hero for the last 10 years. The guy gets mobbed by fans in Thailand. Our entire roster is made up of heroes like him, but for each Asian country."

History has shown that hedging your bets on stars from other fight sports is risky and for ONE FC to compete in the modern MMA world, they will need a more stable source of athletes.

"For MMA to succeed in Asia, you essentially need an MMA ecosystem," explains Cui. "MMA gyms, MMA promotions, MMA sponsors, media broadcasters, etc. Historically, Japan was the only place in Asia that had an MMA ecosystem. And sadly, MMA in Japan has always had historical ties to the mafia. Well, times have changed."

Although Japanese MMA has been on the decline since the demise of Pride, until now Japan has still undoubtedly had the best gyms in Asia. That has the potential to change though with camps like Singapore's Evolve MMA leading the way. The 12,000-square foot Evolve MMA has facilities and a coaching staff that are unheard of in Japan. DREAM lightweight champion Shinya Aoki recently signing on with the gym is a testament to the potential shift in Asia.

"The Asian MMA ecosystem is exploding everywhere in Asia, especially high quality MMA gyms and quality promotions," Cui explains. "And with our capital, our media reach, our sponsors, our Asian world champions, etc., ONE Fighting Championship is happy to lead the way for the creation of a legitimate and thriving Asian MMA ecosystem. There are MMA gyms in every country in Asia right now and the numbers are growing rapidly. Of course, it is not like the US yet, but there is definitely an ecosystem developing."

As Cui acknowledges, a few high quality gyms and a solid promotion to support them is only the beginning of the growth of the sport in Asia. Looking at how the American market blew up though, Cui sees the potential.

"MMA has skyrocketed with 30x growth in the last 10 years and it's barely scratched the surface of its potential, especially for Asia," says Cui. "For example, less than 1 percent of the 3.9 billion people in Asia have heard of or watched MMA. And yet, everyone here in Asia practices or knows about martial arts. Asia has been the home of martial arts for the last 5,000 years. Muay Thai in Thailand, Silat in Indonesia, Kung Fu in China, Karate in Japan, etc. And I believe that MMA has a real chance of becoming the largest sport in the world ... yes, even bigger than soccer."

For MMA, or ONE FC, to have a shot at becoming bigger than soccer, Cui will first need to find a way to introduce the sport to the 48 countries of wildly different economic status and culture that make up Asia. The marketing plan starts in Singapore and it is, in a word: aggressive.

"We have to market very aggressively since we are essentially introducing the sport to a mainstream audience for the first time," Cui says. "For example, for our inaugural show, we have TV commercials through our broadcast partners. Actually we have tied up with the major movie theaters here in Singapore to show our TV commercials during the previews, we have tie-ins with the movie Killer Elite with Robert de Niro and Jason Statham. We have full body-wrap ads on taxis, on subways, we have TV commercials playing on large outdoor TV screens on Orchard Road (the main shopping district in Singapore). We have ads in magazines, newspapers, etc. We have partnered with all the major associations, we have online ads ... in a nutshell, the marketing program is a 360-degree effort to blanket the entire Singapore."

For such a wide-reaching marketing campaign, ONE FC needs strong backers. Given Cui's corporate history, he has been able to bring some major names on board.

"I prefer to let my actions speak for themselves. You can read between the lines though ... the fact that ESPN StarSports and MediaCorp and a few other broadcasters jumped on board without a single event ... or our sponsors like Energizer, Schick, Holiday Inn, etc. They all came on board without any product to show them," says Cui. "Well, put it this way, they have all seen our plans and know how much capital we are investing ... you guys will just have to wait and see. All I can say is that we are the real deal and it's a first for Asia. ONE Fighting Championship marks the first time in Asian MMA history that a legitimate sports media industry veteran has led an MMA organization. It's never happened before and so the access to capital, media, sponsors, etc. is unprecedented."

ONE Fighting Championship, by any measure, is an extremely ambitious undertaking. For Cui though, the biggest challenge will be simply be the fights themselves.

"The biggest challenge is always to put on exciting fights that fans want to see. If we can put on explosive and entertaining fights between the best martial artists in Asia, then everything else will fall into place. Asians understand martial arts - we've been doing it for the last 5,000 years."